What does Ion mean?

[ 2 syll. ion, io-n ] The baby boy name Ion is pronounced as AYAHN †. Ion is used chiefly in the Basque and Romanian languages, and its origin is Old Greek and Hebrew. Old Greek origin, use: It is derived literally from the word 'ion' meaning violet. Ion (Old Greek) is an old form of Ion. In Greek mythology, the name was borne by the son of Xuthus and Hellen; he became the king of Athens and gave his name to the Ionian people.

In addition, Ion is a variant of the name Ian (English, Scottish, and Gaelic).

Ion is also a variant of the name John (English and Hebrew) in the Basque and Romanian languages.

The name Ione (English) is the female form of Ion.

Ion is an infrequently used baby name for boys. It is not listed in the top 1000 names. In 2018, out of the group of boy names directly linked to Ion, John was the most commonly used. 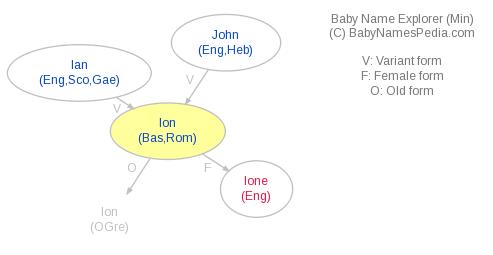