What does Iona mean?

[ 3 syll. io-na, ion-a ] The baby girl name Iona is also used as a boy name, though it is far more popular for girls. It is pronounced ay-OWN-ah (English) †. Iona has its origins in the Old Norse and Old Greek languages. It is used largely in English and Scottish. From Old Norse roots, its meaning is 'yew-tree island; island'. The first name is derived from the name of the Scottish island of Ioua, meaning 'yew-tree island'. The Gaelic name of the island is from the Old Norse ey. A misreading of the island's name could have resulted in its current name Iona. In the 6th century, Saint Columba founded a monastery on the island, which became a base for the spread of Christianity through Scotland and northern England. The first name was adopted by English speakers in the 19th century, and mainly in Scotland.

Iona is a form of the English Ione.

Iona is rare as a baby girl name. At the modest peak of its usage in 1918, 0.034% of baby girls were named Iona. It was #317 in rank then. The baby name has substantially dropped in popularity since then, and is used only on a very light scale now. Out of all girl names in its family, Iona was nevertheless the most popular in 2018. Iona has primarily been a baby girl name in the last century. 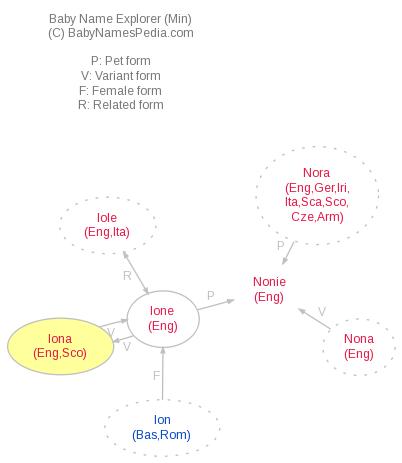