[ 3 syll. i-rai-na, ir-a-ina ] The baby girl name Iraina is pronounced as iy-REY-Naa- †. Iraina has its origins in the Old Greek language and it is used largely in Russian.

In addition, Iraina is a variant form of the English, German, Italian, Scandinavian, and Spanish Irene in the Russian language.

Variant forms share the origin and meaning of the name Iraina.

Iraina is not often used as a baby girl name. It is not in the top 1000 names. In 2018, among the family of girl names directly related to Iraina, Irene was the most regularly used. 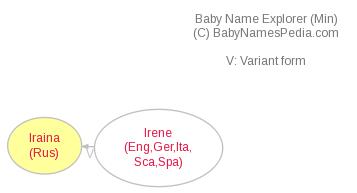