What does Irma mean?

[ 2 syll. ir-ma, irm-a ] The baby girl name Irma is pronounced in English as AHR-Mah †. Irma is of Germanic origin, and it is used mainly in the English, French, German, Indian, Italian, and Spanish languages. The name is derived from the short form of German names with the first element irmin (meaning 'whole, immense, universal') or ermen and starting with 'Irm-', such as Irmingard. It was first adopted occasionally by English speakers in the late 19th century. The baby name was popularized in the USA by the radio comedy My Friend Irma (1940s), which had its success extended to film and television, and the comedy film Irma La Douce (1963), starring Jack Lemmon and Shirley MacLaine.

Irma is a form of the English and German Erma.

Irma is also a contraction of the German Irmingard.

Irma has 16 forms that are used in English and foreign languages. Forms used in English include Erma (used in German too), Herma, Irmagard, Irmagarde, Irmeena, Irmen, Irmgard, Irmgarde, Irmina, Irmine, and Irmyna. The Portuguese Irmã is a form of Irma that is in foreign languages. Specific foreign variants include the diminutive forms Imke (German and Frisian), Imma (German), Irmela (German), and Irmuska (Hungarian).

Irma is unusual as a baby name for girls. Its usage peaked modestly in 1911 with 0.139% of baby girls being given the name Irma. It ranked at #136 then. The baby name has since experienced a marked decline in frequency, and is of only sporadic use now. Among the group of girl names directly linked to Irma, Emma was the most commonly used in 2018. 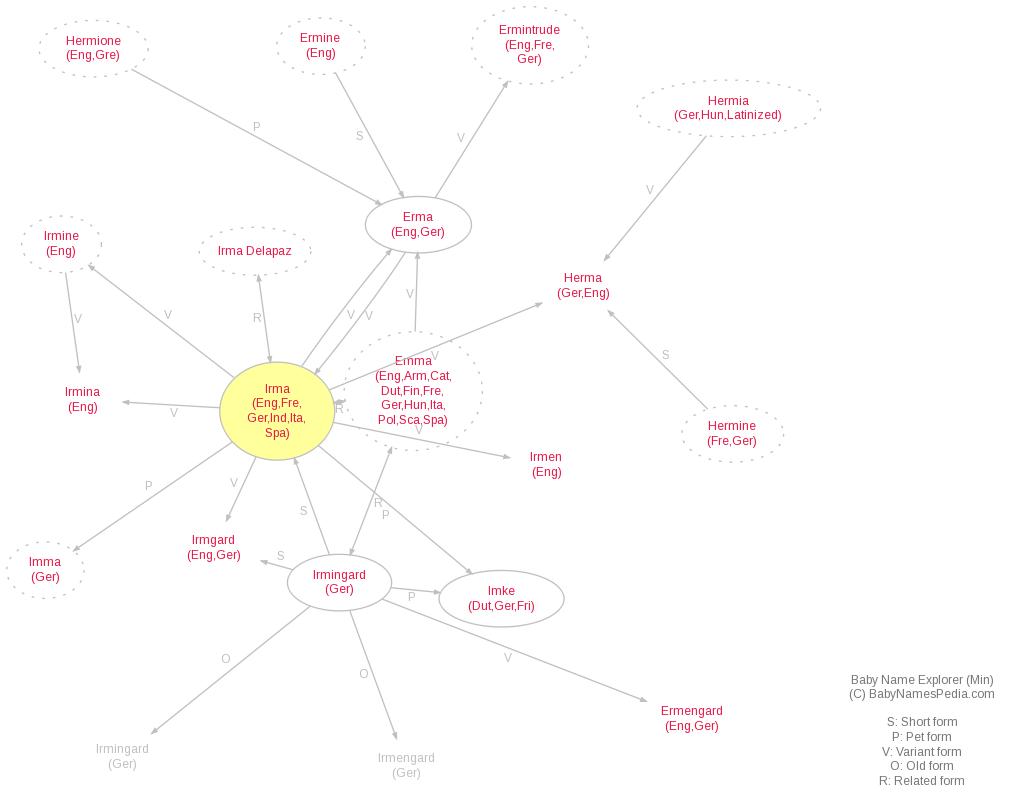