What does Irving mean?

[ 2 syll. ir-vin(g), irv-i-ng ] The baby boy name Irving is pronounced ER-Vih-NG †. Irving is of Celtic origin. It is used mainly in English and Scottish. The name Irving means 'green river'. It is from the word afon which is of the meaning 'river'. The first name is derived from the Scottish surname, originally from a place name 'ir afon' in the former county of Dumfriesshire. It was first adopted by English speakers in the 19th century. The name was adopted by the Russian-born US lyricist Irving Berlin (Israel Baline, 1888-1989), one of the most prolific US songwriters in history.

Irving has 18 variations that are used in English and foreign languages. English variations of Irving include Erv, Ervin, Ervine, Erwin, Irv, Irven, Irvene, Irvine (used in Scottish too), Irvington, Irvy, Irvyn, Irvyne, Irwin, Irwyn, and Ving. Another English variant is the contracted form Irvin (used in Scottish too). Eireamhon (Irish) and Heremon (Gaelic) are variations of the name that are used in foreign languages.

Irving is rare as a baby boy name. At the modest peak of its usage in 1912, 0.181% of baby boys were named Irving. It had a ranking of #94 then. The baby name has suffered a marked decline in popularity since then, and is currently of only very light use. Out of all boy names in its family, Irving was nevertheless the most popular in 2018.

A baby name that sounds like Irving is Ervins (Latvian). 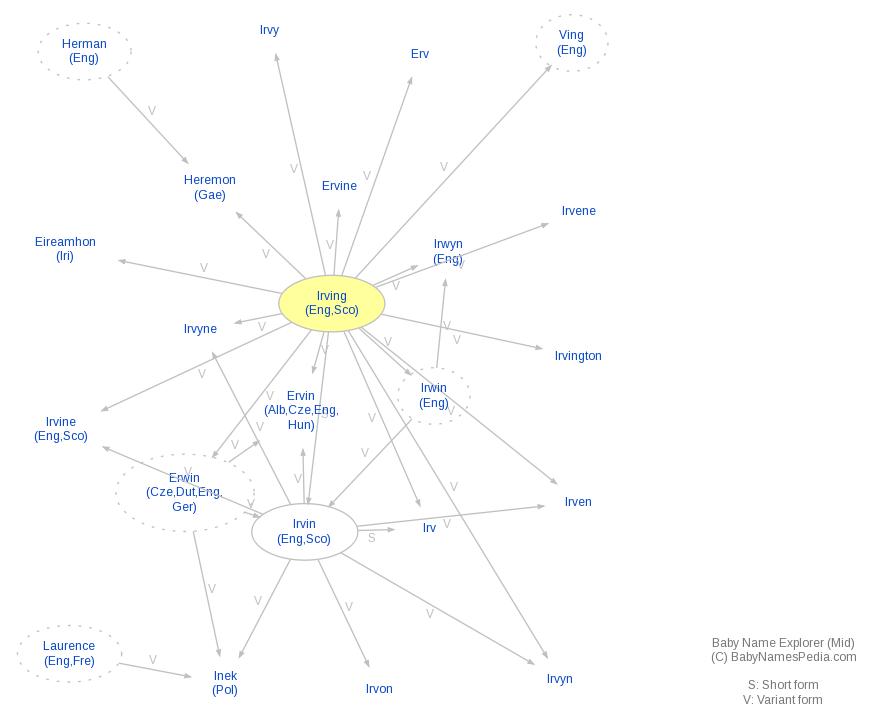