What does Irwin mean?

[ 2 syll. i-rwi(n), ir-w-in ] The baby boy name Irwin is pronounced as -ERWihN †. Irwin is used chiefly in English, and its origin is Germanic, Celtic, and Old English. From Old English roots, its meaning is boar friend. It is from the elements 'eofor' meaning boar ; 'wine' friend. The name is derived from the surname, which is itself from Eoforwine (Old English), a cognate of Erwin. It has been used by English speakers since the mid-19th century.

Irwin is a spelling variant of the name Erwin (Czech, Dutch, English, and German) in the English language.

Irwin is also a variant of the name Irving (English and Scottish) in the English language.

Irwin has 12 variants that are used in English and other languages. English variants include Irvin, Irwen, Irwenn, Irwenne, Irwine, Irwing, Irwinn, Irwinne, Irwyn, and Irwynne. Another English form is the spelling variant Erwin (used in Czech, Dutch and German as well). A variant of Irwin used in other languages is Herwin (Dutch).

Irwin is an uncommon baby name for boys. At the height of its usage in 1925, 0.046% of baby boys were named Irwin. Its ranking then was #247. The baby name has since steeply dropped in popularity, and is today of very modest use. Within all boy names in its group, Irwin was nevertheless the most popular in 2018. 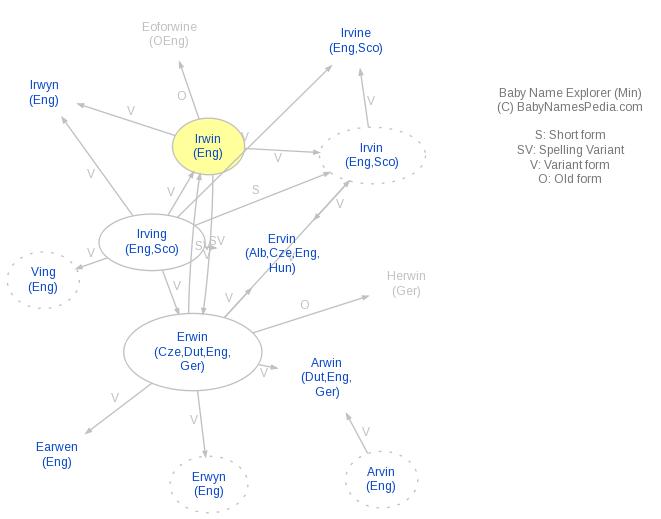