What does Isaac mean?

[ 2 syll. i-saa(c), is-a-ac ] The baby boy name Isaac is pronounced in English as AY-ZahK †. Isaac is used chiefly in the English language and its origin is Hebrew. The name means he laughs, laughter. A biblical name, it is derived from the word 'tsachaq' which means to laugh. Yitschaq (Hebrew) is an original form of Isaac. The name was borne in the Bible by one of the sons of Abraham and Sarah; his birth brought laughter and joy to his parents because Sarah was ninety-nine years old when she was informed of the pending birth. The name was taken up by Jews from the Middle Ages. In the 17th century, English Puritans started to adopt the name with some regularity. The name still remains more common with Jews.

The name Isaac is used to a great extent; it has 32 variants that are used in English and other languages. Variants of Isaac used in English include Icek, Ikey, Ikie, Isaack, Isaak (also used in German, Greek, Russian, and Yiddish), Isaakios, Isac, Isack, Isaic, Isiac, Issa, Issac, Itzak, Izaac, Izaak (also used in Dutch and Polish), Izikm, Izsak, and Yitzchak. The diminutives Ike (also used in Hebrew), Zack, and Zak are other English variants. 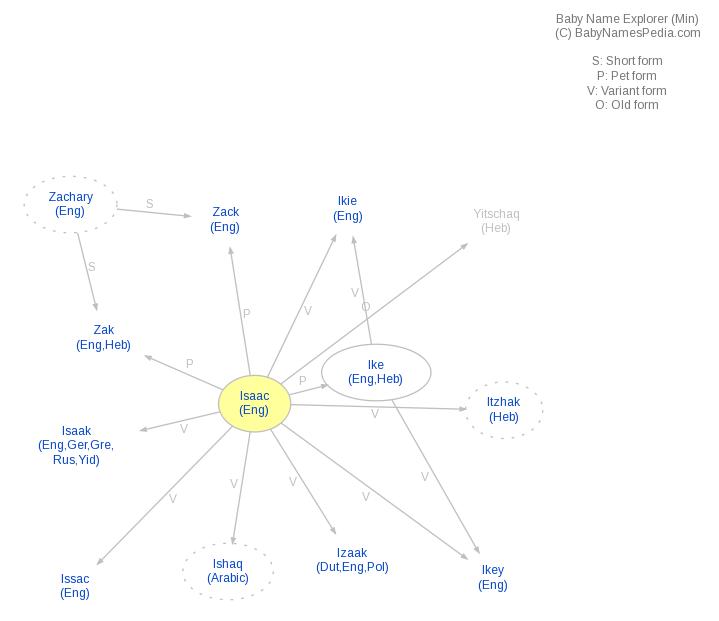