What does Isabelle mean?

[ 3 syll. i-sa-bel-le, is-abe-lle ] The baby girl name Isabelle is pronounced in English as IHZ-ah-BehL or in French as iy-Zae-BEHL †. Isabelle has its origins in the Hebrew language, and it is used largely in English, French, and German.

Isabelle is a variant of Isabel in the English, French, and German languages.

Isabelle has 23 variants that are used in English and foreign languages. English variants include Isa, Isabal, Isabel, Isabele, Isabeli, Isabell, Iseabail, Iseabal, Iseabel, Isibeal, Isibel, Issie, Izabell, Izabella, Izzy, Sabella, and Sabelle. Other English forms include the contracted form Belle (used in French as well), the diminutive form Izzi, and the spelling variants Isobelle, Izabelle, and Yzabelle. Isaline (French) is a variant of Isabelle that is used in foreign languages.

Variant forms share the origin and meaning of Isabelle.

Isabelle is popular as a baby name for girls. The name's popularity increased from the 1990s up to the 2000s. Its usage peaked modestly in 2007 with 0.194% of baby girls being named Isabelle. It ranked at #79 then. The baby name has since slipped in popularity. In 2018, it ranked at #113 with a usage of 0.143%, but it was nevertheless the most popular among all girl names in its group. 29% more girls were named Isabelle than the next most popular name, Isabel, in 2018. 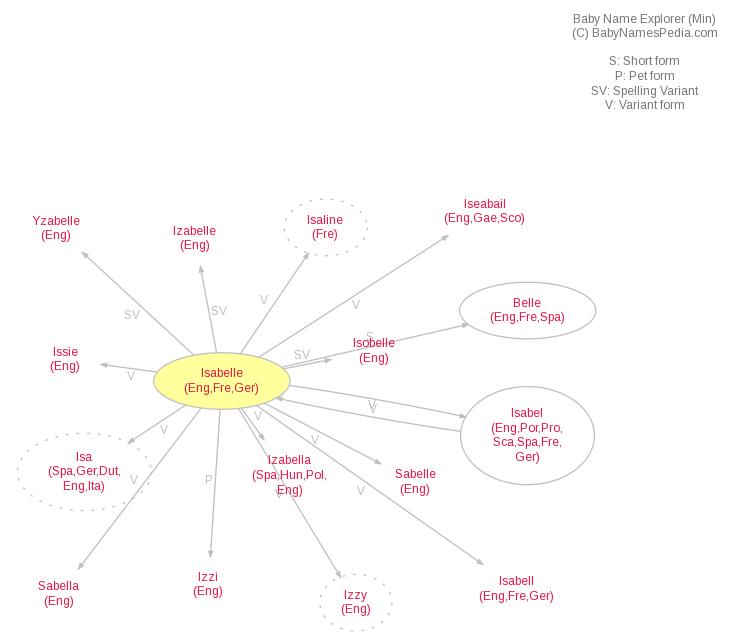