What does Isidora mean?

[ 4 syll. i-si-do-ra, is-id-ora ] The baby girl name Isidora is pronounced in English as ihZ-ih-DOWR-ah, in Italian as iy-Ziy-DOW-Raa, or in Spanish as iy-Siy-DHOW-Raa †. Isidora is of Old Greek origin. It is used mainly in English, German, and Italian. The name Isidora means 'gift of Isis'. It is derived from doron which means 'gift' ; Isis. The name was rarely used in medieval times, but its adoption was boosted in the late 19th century by the popular American dancer Isadora Duncan (1878-1927). Isidora is the feminine version of the English and French Isidore.

The contracted form Dora (English, French, German, Italian, and Spanish), and the diminutives Dory (English), Izzie (English), and Izzy (English) are other variants of Isidora.

Isidora is not commonly used as a baby girl name. It is not in the top 1000 names. 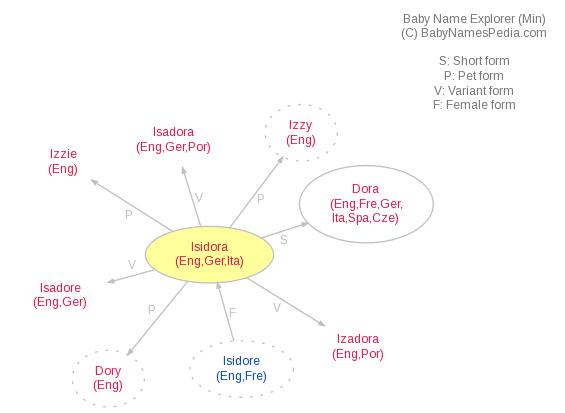