What does Isla mean?

[ 2 syll. i-sla, is-la ] The baby girl name Isla is pronounced as -AY-Laa- †. Isla is of Scottish origin. It is used mainly in English and Scottish. The first name is a 20th century coinage. It is sometimes considered a diminutive of Isabella. Isla is the feminine version of the Scottish Islay.

The origin and meaning of the name Isla is inherited by all variant forms.

Isla is popular as a baby girl name, and it is also perceived as trendy. The name has been growing in popularity since the 2000s. Its usage peaked modestly in 2018 with 0.184% of baby girls being named Isla. It had a ranking of #82 then. Among the family of girl names directly related to Isla, Isabella was the most popular in 2018. It was more widely used than Isla by 4 times in that year. 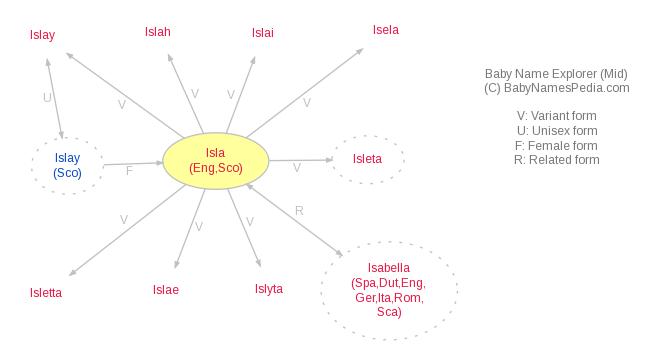