What does Itzel mean?

[ 2 syll. it-zel, itz-el ] The baby girl name Itzel is pronounced as iy-TSAHL †. Itzel is mainly used in the English language and its language of origin is Native American-Maya. The meaning of the name is moon goddess, she of the rainbow. An original form of Itzel is Ix Chel (Mayan). The first name is derived from the name of the Mayan moon goddess, Ix Chel.

Itzel is a variant form of Isabel.

Itzel is a rather popular baby girl name. The name jumped in popularity from the 1990s up to the 2000s; prior to that, it was of sporadic use only. Its usage peaked modestly in 2005 with 0.048% of baby girls being given the name Itzel. It was #328 in rank then. The baby name has declined in popularity since then. In 2018, its usage was 0.029% and its ranking #574, but it was nonetheless the 2nd most popular after Isabel, among all girl names in its family. In 2018, it was 4 times more regularly used than Itzel. 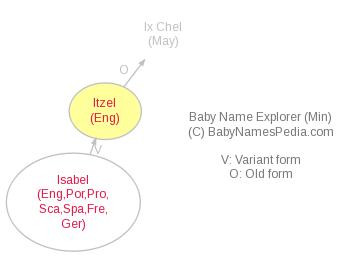