What does Ivana mean?

[ 3 syll. i-va-na, iv-ana ] The baby girl name Ivana is pronounced iy-Vaa-Naa- †. Ivana is of Hebrew origin. It is used mainly in Czech, Russian, Slavic, and Italian.

Ivana is also a Slavic form of the English and Scottish Jean.

Ivana is also a Czech, Italian, Russian, and Slavic form of the English Joan.

Ivana is the feminine equivalent of the Belorussian, Czech, English, Russian, Slavic, and Ukrainian Ivan.

Ivana has 14 forms that are used in English and foreign languages. English forms of the name include Ivah, Ivanah, Ivane, Ivanea, Ivania, Ivanne, Ivannia, Ivany, Ivanya, and Yvanna. The Slavic Yvana is a form of Ivana that is used in foreign languages. The contracted form Iva (Czech and Slavic), the diminutive Ivanka (Czech and Slavic), and the spelling variant Ivanna (Russian and Ukrainian) are other foreign forms.

Variant forms inherit the origin and thus the meaning of the name Ivana.

Ivana is rare as a baby girl name. At the modest peak of its usage in 2010, 0.014% of baby girls were named Ivana. It had a ranking of #955 then. The baby name has markedly slipped in popularity since then, and is of only sporadic use now. Out of the family of girl names directly related to Ivana, Jane was the most regularly used in 2018. 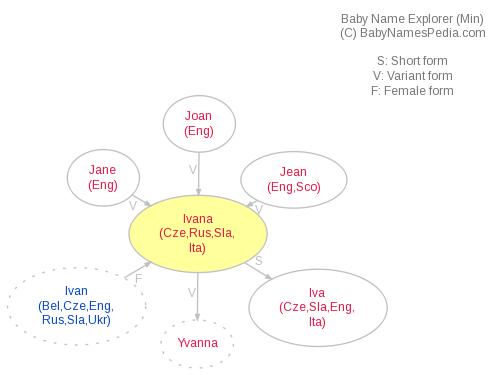