What does Ivor mean?

Ivor's origin is Old Norse, and its use, English, Gaelic, Scandinavian, and Welsh. Ivor is of the meaning 'archer-soldier, bowman'. It is derived from yr meaning 'yew, bow' ; arr 'army, warrior'. Ívarr (Old Norse) is an older form of the name. The old form Ívarr was brought to England by medieval Scandinavian settlers, and it was subsequently adopted in Scotland, Ireland, and Wales. Ivor has from an early date been commonly associated with Ifor, although the two are of strictly different etymologies. The name was borne by an Irish saint.

Ivor has 16 variations that are used in English and foreign languages. English variations include Ifor, Ivarr, Ivore, Ivry, and Yvor.

Ivor is mainly used in the Scottish language and it is of Scottish Gaelic origin. An original form of Ivor is Éibhear (Gaelic). The name is Anglicized from Éibhear.

In addition, Ivor is a variation of Eber (Irish).

Ivor is also a variation (English) of Ingvar (Scandinavian and English).

Ivor is unusual as a baby name for boys. Its usage peaked modestly in 1902 with 0.005% of baby boys being given the name Ivor. It ranked at #977 then. The baby name has since experienced a decline in frequency, and is today of sporadic use. Among all boy names in its group, Ivor was nonetheless the most regularly used in 2018. 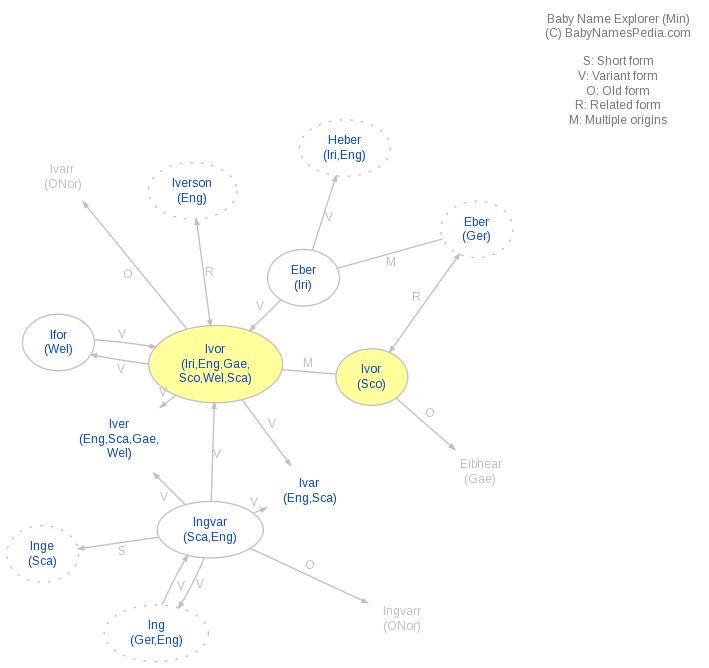