What does J. mean?

J. is derived from English-American origins.

J.'s origin is Korean. The name is of the meaning attractive.

J. is used predominantly in English and its origin is English-American. The meaning of J. is the letters J.C.. The name can be derived from the combination of the letter 'J-' and the letter '-C', usually as a short form of first and middle names which start with these letters.

J. is largely used in the Chinese language and it is also derived from Chinese origins. The name is of the meaning continuity.

J. is used chiefly in English, Dutch, German, and Japanese, and its origin is Hebrew. From the short form of other given names, but now used as an independent name in its own right.

J.'s origin, as well as its use, is in the Chinese language. J. is of the meaning 'giant'.

J. is of Latin origin. J. is a variant form of the name J.

J. is a variation of the name Jayce (English).

J. is also a shortening of the name Johannes (Dutch, German, and Scandinavian) in the Dutch and English languages.

J. is also a variant of the name John (English and Hebrew) in the Dutch and German languages.

† approx English pronunciation for J.: JH as in "joy (JH.OY)" 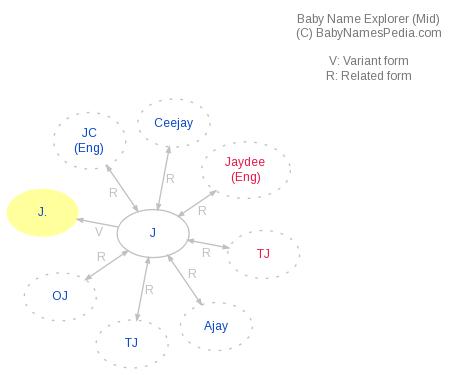