What does Jabbar mean?

[ 2 syll. jab-bar, ja-bb-ar ] The baby boy name Jabbar is pronounced as JHaeBBaaR †. Jabbar is used mostly in the Arabic and Indian languages. Its language of origin is African-Swahili and Arabic. From Arabic roots, its meaning is powerful, mighty. This is one of the names of Allah.

In addition, Jabbar is a derivative of the English, African, and Swahili name Jabari.

Jabbar is also a derivative (Indian) of the Arabic name Jabir.

Jabbar is uncommon as a baby boy name. At the modest height of its usage in 1972, 0.005% of baby boys were given the name Jabbar. It was #912 in rank then. The baby name has declined in popularity since then, and is currently of sporadic use. Within the family of boy names directly linked to Jabbar, Jabari was the most frequently used in 2018. 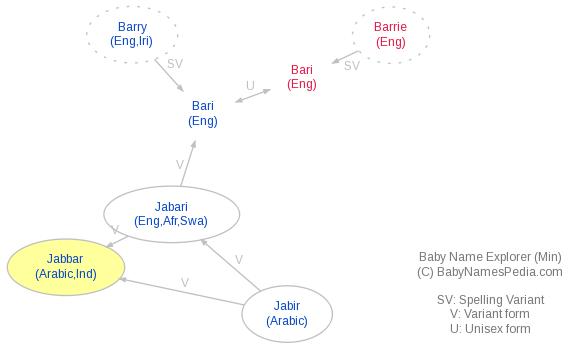