What does Jack mean?

In medieval times, the name was widely used, and it became a slang word meaning 'man'. It is well-known as the archetypal folk hero in many nursery rhymes and fairy tales such as 'Jack and the Beanstalk', 'Jack Sprat', and 'Little Jack Horner'. It has also been used to refer to real or mythical characters of otherwise unknown names, such as the 19th-century persons, the murderer Jack the Ripper and the high-jumping demon Spring Heeled Jack who became the protagonist of many Victorian penny dreadfuls and plays. The name has also been taken as an informal diminutive of James, due to its similarity in sound to Jacques, the French form of James; otherwise, the relation is not etymologically justified.

In addition, Jack is a short form of the name Jackson (English).

Jack is also a Dutch and English diminutive form of the name Jacob (Dutch, English, German, and Scandinavian).

Jack is also an English diminutive form of the name John (English and Hebrew).

The name Jack is used to a great extent; it has 28 variants that are used in English and other languages. Variants used in English include Jaac, Jaak, Jacke, Jackee, Jackey, Jackman, Jacko, Jackub, Jacq, Jacqin, Jak, Jake, Jakk, Jaq, Jax, Jocko, and Siaki. The diminutive forms Jacki, Jackie, Jacky, and Jockey are other English variants.

Jack is very popular as a baby name for boys, and it is also considered trendy. At the height of its usage in 1927, 1.101% of baby boys were given the name Jack. It ranked at #16 then. The baby name has since experienced a substantial loss in popularity. In 2018, its usage was 0.458% and its ranking #28, enjoying a minor resurgence in the recent decade. Within the group of boy names directly linked to Jack, James was the most commonly used. In 2018, it was used 53% more than Jack. Jack has mostly been a baby boy name in the past century. In 1933, the name Jack was given to 189 times as many baby boys than girls. 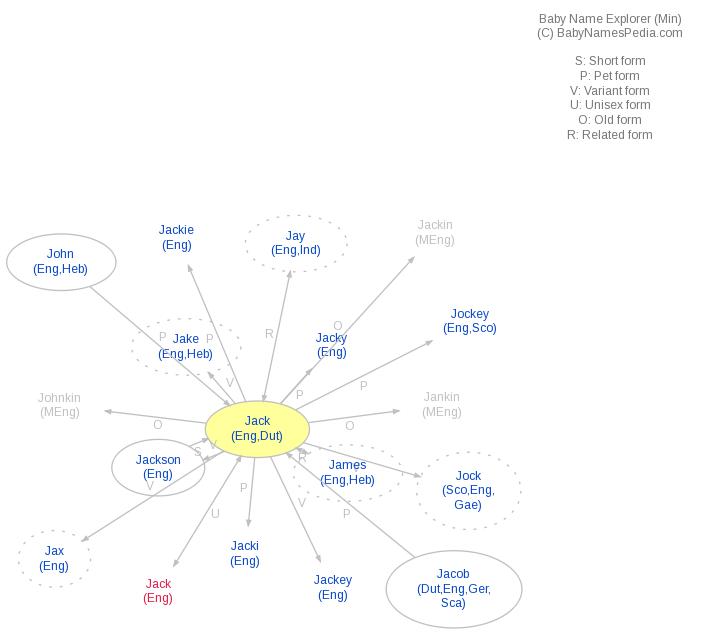