What does Jacob mean?

[ 2 syll. ja-cob, jac-ob ] The baby boy name Jacob is pronounced as JHEY-KahB (English) or YAA-KaoP (Dutch) †. Jacob is used chiefly in the Dutch, English, German, and Scandinavian languages, and its origin is Hebrew. The name's meaning is Yahweh may protect; holder of heel; supplanter. A biblical name, it is derived from the elements 'yahweh' name of God ; 'aqeb' meaning heel ; 'aqab' to supplant, to cheat. The name Jacob is from the Yaakov (Hebrew) or Yakubel (Hebrew). The usual English form James shares the same roots and is from the byform Iacomus (Latin), itself from Iacobus (Latin).

The name Jacob was borne in the Bible by one of the twin sons of Isaac and Rebecca who was born holding on to the heel of his elder brother Esau. With God's approval, Jacob went on to trick his brother Esau of his rights as the first-born, thereby becoming he father of twelves sons who went on to found the twelve tribes of Israel. He later tricked the dying Isaac to bless him instead of Esau. Esau went on to remark that Jacob was rightly named, for Jacob 'supplanted' Esau twice.

The name was first used by English speakers as a clerical name prior to the Norman Conquest, but it was not popular during the Middle Ages, except among Jews. In the 17th century, the name saw a revival among English Puritans, possibly due to their perception of supplanting others less worthy than themselves. In modern times, the name is still more popular with Jews than Christians. The name Jacqueline (English and French) and the name Jakoba (German) are the female forms of Jacob.

What are the Variant Forms of Jacob? 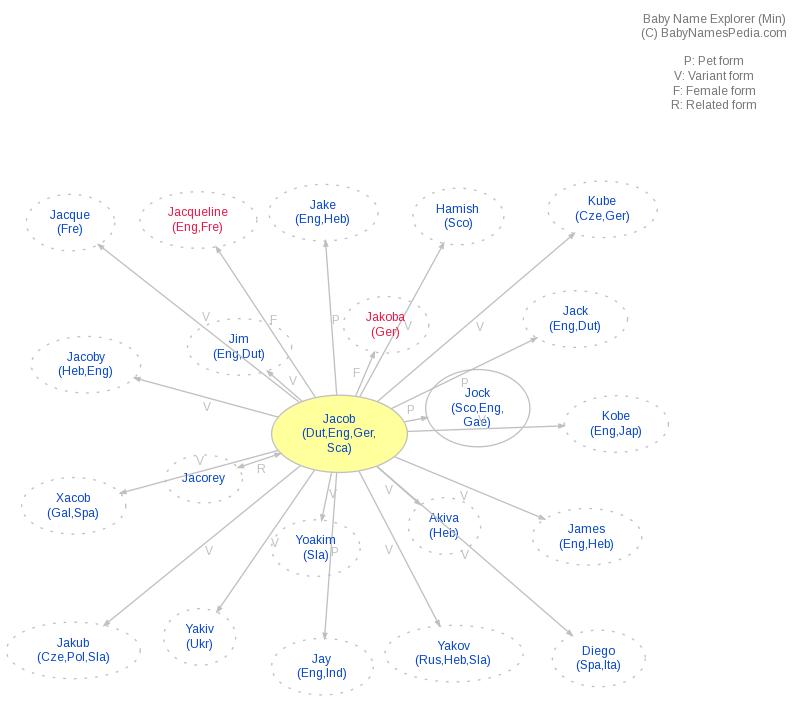