What does Jacorey mean?

[ syll. ja-co-rey, jac-or-ey ] The baby boy name Jacorey is pronounced JHEYKAOR-iy †. Jacorey has its origins in the English-American language. The name is derived from the combination of Jacob and Corey.

Derivatives of Jacorey include the names Jacari, Jacorie, Jacory, and Jakari.

The origin and meaning of the name Jacorey is inherited by all variant forms.

Jacorey is not frequently used as a baby boy name. It is not ranked within the top 1000. In 2018, out of the family of boy names directly linked to Jacorey, Jacob was the most widely used. 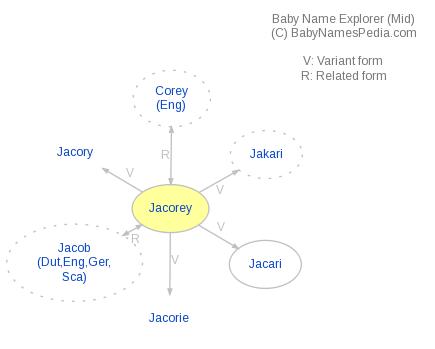