What does Jacqueline mean?

[ 3 syll. jac-que-li-ne, ja-cquel-ine ] The baby girl name Jacqueline is pronounced JHAEK-ah-LihN or JHAEK-ah-LiyN in English or ZHaeK-LIYN or ZHae-Kah-LIYN in French †. Jacqueline's language of origin is Hebrew. It is predominantly used in English and French. The name Jacqueline means 'Yahweh may protect; holder of heel; supplanter'. It is a biblical name derived from yahweh 'name of God' ; aqeb meaning 'heel' ; aqab 'to supplant, to cheat'. The name is considered a diminutive of Jacques. The name was first used by English speakers in the 13th century, although it was only popular in the mid 20th century, promoted by the celebrity status of Jacqueline Kennedy (1929-1994), the wife of President John F. Kennedy; she was of French roots. Jacqueline is the feminine version of the Dutch, English, German, and Scandinavian Jacob.

What are the Variant Forms of Jacqueline?

Jacqueline is an all-time favorite. Today it is still a rather popular baby girl name, but to a lesser degree than it was previously. The name grew in popularity from the 1900s up to the 1960s. At the height of its usage in 1964, 0.613% of baby girls were named Jacqueline. It had a ranking of #37 then. The baby name has seen a steep drop in frequency since then. In 2018, it ranked at #339 with a usage of only 0.051%, but it was nevertheless the most popular within all girl names in its family. Jacqueline was 93% more popular than the next ranked name, Jamie, in 2018. 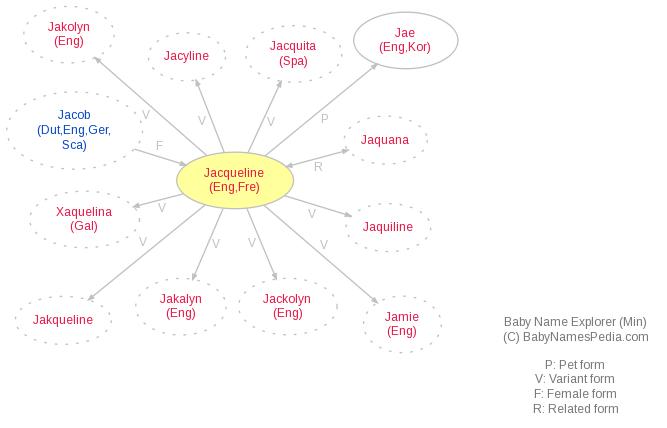