What does Jade mean?

[ 1 syll. ja-de, jad-e ] The baby girl name Jade is also used as a boy name, though it is far more popular for girls. It is pronounced JHey-D †. Jade has its origins in the Spanish language. It is used largely in English and French. The first name is derived from the name of the semi-precious stone jade, which is itself from the Spanish phrase 'piedra de ijada' meaning 'stone of the bowels' and ultimately of the element ijada. The stone was thought to treat intestinal and digestive disorders. The name was adopted by English speakers in the late 19th century, but it was not as popular as other gemstone names, possibly due to its etymological meaning. The name saw a boost in popularity from the late 20th century after the famed English rock singer Mick Jagger gave the name to his daughter Jade Jagger (1971-).

The name Jade is used to a great extent; it has 33 forms that are used in English and foreign languages. English forms of the name include Jada, Jadah, Jadea, Jadeana, Jadeann, Jadee, Jaden, Jadene, Jadera, Jadienne, Jadine, Jadira, Jadrian, Jadrienne, Jady, Jadyn, Jaed, Jaeda, Jaedyn, Jaid, Jaida, Jaiden, Jaidyn, Jayda, Jaydea, Jaydee, and Jayden. Other English forms include the familiar form Jadie, and the spelling variants Jaede, Jaide, and Jayde. Forms used in foreign languages include the Italian Giada and the Scandinavian Jadzia.

Jade is popular as a baby girl name. The name increased in popularity from the 1970s up to the 2000s; prior to that, it was of only infrequent use. At the modest height of its usage in 2002, 0.184% of baby girls were named Jade. It was #86 in rank then. The baby name has seen a drop in popularity since then. In 2018, it ranked at #111 with a usage of 0.145%, but it was nevertheless the most popular within all girl names in its family. Jade was thrice as popular as the 2nd ranked name, Jada, in 2018. Although Jade is today more frequently used for baby girls, there was a period from 1968 to 1974 when more boys were given the name. After 1975, increasingly the name became more popular with baby girls than with boys. In 2001, 21 times more baby girls than boys were given the name Jade. 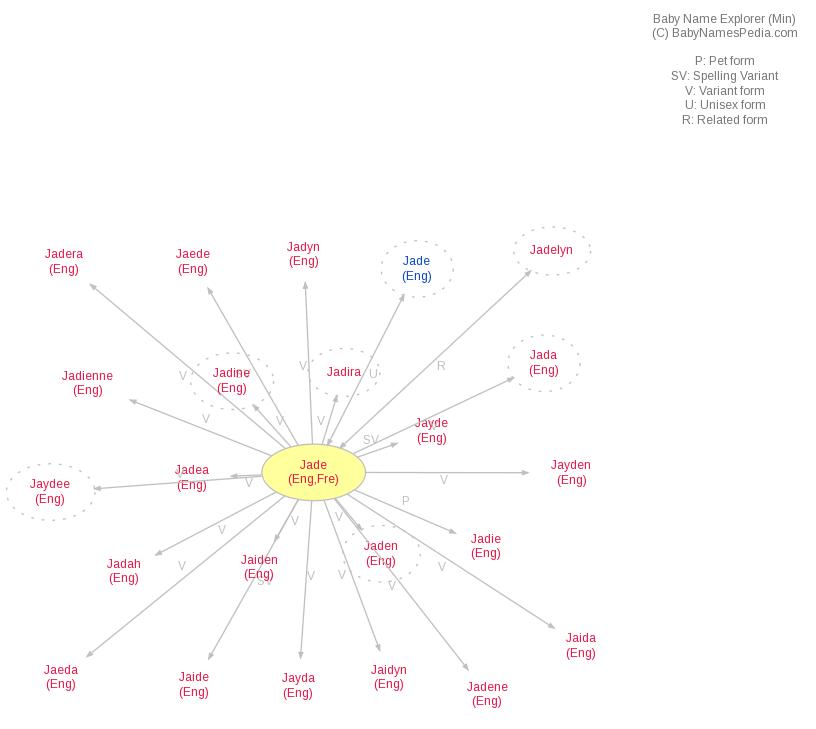