What does Jaime mean?

[ 2 syll. jai-me, ja-ime ] The baby boy name Jaime is also used, but less often, as a girl name. It is pronounced in Spanish as HHAY-Meh †. Jaime is largely used in the Portuguese, Spanish, and English languages, and its origin is Hebrew.

Jaime is a Portuguese and Spanish variant of the name Jacob (Dutch, English, German, and Scandinavian).

Jaime is also an English, Portuguese, and Spanish variant of the name James (English and Hebrew).

Jaime is fairly popular as a baby name for boys. The name's popularity jumped from the 1940s up to the 1970s; before that, it was of very light use only. Its usage peaked modestly in 1976 with 0.086% of baby boys being given the name Jaime. Its ranking then was #169. The baby name has since experienced a loss in popularity. In 2018, its usage was 0.028% and its ranking #512. Among the group of boy names directly linked to Jaime, James was the most commonly used. In 2018, its use outnumbered Jaime's by 25 times. There were times from 1976 to 1986 when more girls than baby boys were named Jaime, but currently it is more often than not a baby boy name. In 2004, 4 times as many baby boys than girls were given the name Jaime. 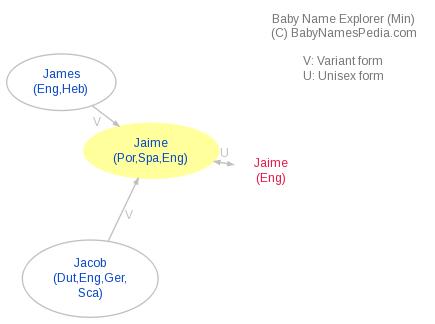