What does Jair mean?

[ 2 syll. jai(r), ja-ir ] The baby boy name Jair is pronounced in English as JHEY-ahR †. Jair is an English name of Hebrew origin. The name is of the meaning he enlightens, he shines. A biblical name, it is derived from the element 'owr' meaning to enlighten, to shine. The name was borne in the Bible by four characters, including a descendant of Judah and Manasseh who captured villages in Gilead which he renamed Havoth-Jair meaning 'Jair's villages', as well as a judge of Israel who ruled for twenty-two years after the death of Tola. The name Yahaira (Spanish and English) and the name Yaira (Hebrew) are the female forms of Jair.

Jair is unusual as a baby name for boys. Its usage peaked modestly in 2003 with 0.023% of baby boys being given the name Jair. Its ranking then was #506. The baby name has since experienced a marked fall in popularity, and is today of irregular use. Among the group of boy names directly linked to Jair, Yahir was the most widely used in 2018. 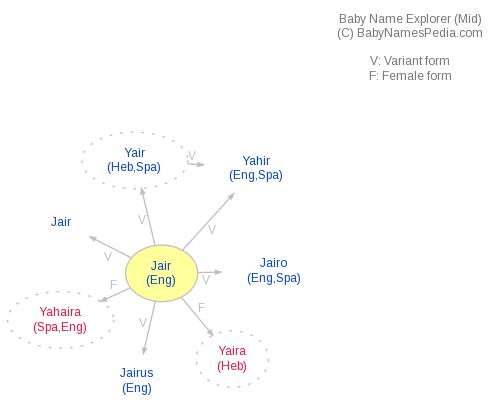