What does Jamie mean?

[ 2 syll. ja-mie, jam-ie ] The baby girl name Jamie is also used as a boy name, though it is more often a girl name. It is pronounced JHEY-Miy- †. Jamie is of Hebrew origin and it is used mainly in English.

In addition, Jamie is a form of the English and French Jacqueline in the English language.

Jamie is also a form of the English James.

Jamie is the feminine form of the English and Hebrew James.

Jamie is an all-time favorite. At present it is still rather popular as a baby girl name, but not as much as it was before. The name increased in popularity from the 1920s up to the 1970s. At the peak of its usage in 1976, 0.798% of baby girls were named Jamie. It had a ranking of #18 then. The baby name has markedly slipped in popularity since then. In 2018, it ranked at #614 with a usage of only 0.026%. Out of the family of girl names directly related to Jamie, Jacqueline was the most frequently used. It was more regularly used than Jamie by 93% in 2018. Though there were times from 1904 to 1975 when more boys than baby girls were given the name Jamie, the name is today more frequently used for baby girls. There were 68% more baby girls than boys who were named Jamie in 2017. 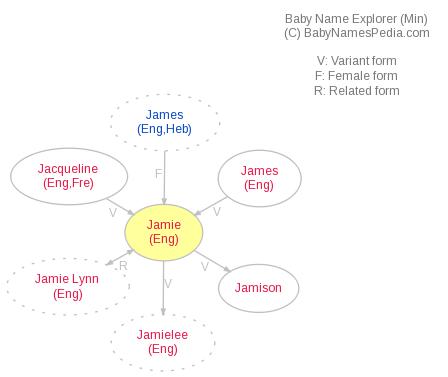