What does Jamir mean?

[ syll. ja-mir, jam-ir ] The baby boy name Jamir is pronounced JHaaMIHR †. Jamir is of English origin and it is also used mainly in English. The name is probably a recent invention using the popular prefix 'Jam-'.

Jamir is a variation of Jamar (English).

Both the origin and meaning of Jamir is inherited by all variant forms.

Jamir is fairly popular as a baby name for boys. The name's popularity has been increasing since the 2000s. At the modest height of its usage in 2018, 0.021% of baby boys were named Jamir. It ranked at #646 then. Within all boy names in its group, Jamir was the most popular in 2018. 31% more boys were named Jamir than the subsequent ranked name, Jamal, in that year. 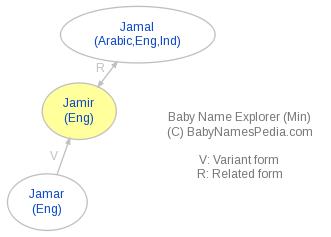