What does Jan mean?

[ 1 syll. jan, ja-n ] The baby girl name Jan is also used as a boy name, with the latter form being slightly more popular. It is pronounced JHAEN †. Jan has its origins in the Hebrew language. It is used largely in Czech, Dutch, English, German, and Polish. The name is derived as a contracted form of Janice, Janet, and other names starting with 'Jan-'. See Jan for more information.

In addition, Jan is a shortening of the English Jane.

Jan is also a shortening of the English Janet.

Jan is also a shortening of the English Janice.

Other forms of the name include the diminutive Jannie and the English spelling variant Jann.

Jan is rare as a baby girl name. At the modest peak of its usage in 1956, 0.155% of baby girls were named Jan. It had a ranking of #136 then. The baby name has substantially dropped in popularity since then, and is of only irregular use today. In 2018, out of the family of girl names directly related to Jan, Jane was the most commonly used. Although there were times from 1930 to 1983 that Jan was more popular with girls, today it is somewhat used more commonly as a boy name. 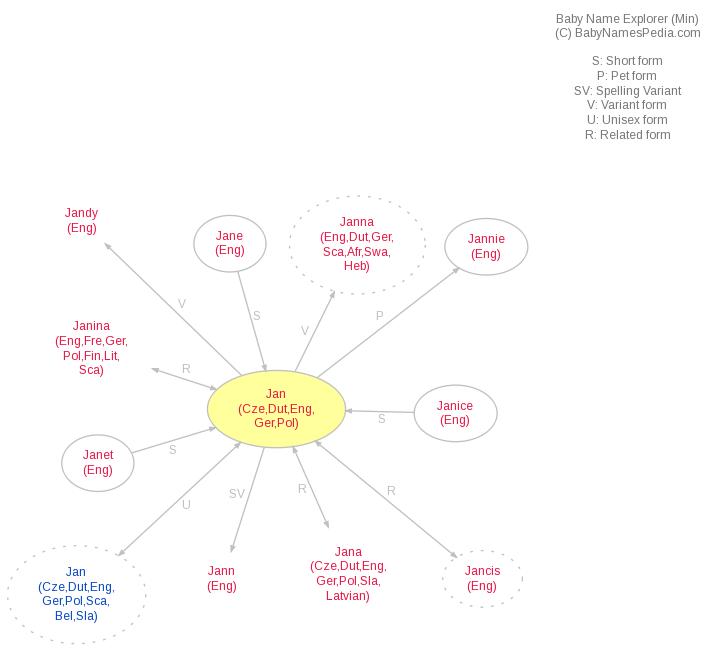