What does Jana mean?

[ 2 syll. ja-na, jan-a ] The baby girl name Jana is also used as a boy name, though it is far more popular for girls. It is pronounced YAA-Naa (Dutch, German) †. Jana has its origins in the Hebrew language. It is used largely in Czech, Dutch, English, German, Polish, Slavic, and Latvian.

Jana is a Czech, Dutch, English, German, Polish, and Slavic form of the English Jane.

Jana is also a Czech, Dutch, German, Polish, and Slavic form of Janna.

Jana is also a Latvian form of the English and Scottish Jean.

Jana is an all-time favorite. Currently it is still somewhat popular as a baby girl name, but to a lesser degree than it was before. At the modest peak of its usage in 1961, 0.070% of baby girls were named Jana. It was #226 in rank then. The baby name has suffered a substantial decline in frequency since then, and it is of only sporadic use in recent times. In 2018, it ranked at #984 with a usage of 0.015%. Out of the family of girl names directly related to Jana, Jane was the most widely used. It was 4 times more commonly used than Jana in 2018. Jana has primarily been a baby girl name in the last century. 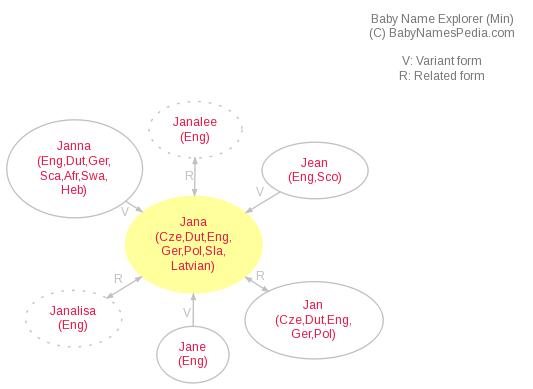