What does Janessa mean?

[ 2 syll. ja-nes-sa, jan-e-ssa ] The baby girl name Janessa is pronounced as YaaN-S-aa- †. Janessa is used mostly in the English language, and it is of Hebrew and Latin origin.

In addition, Janessa is a derivative of the English name Jane.

Janessa is also a derivative (English) of the English and German name Vanessa.

The origin and thus the meaning of the name Janessa is inherited by all variant forms.

Janessa is a classic favorite. Today it is still somewhat popular as a baby name for girls, though it was in more widespread use before. The name has been rising in popularity since the 1980s. At the modest peak of its usage in 2009, 0.028% of baby girls were given the name Janessa. It ranked at #546 then. In 2018, its usage was 0.015% and its ranking #978. Out of the group of girl names directly linked to Janessa, Vanessa was the most popular. In 2018, it was used 5 times more than Janessa. 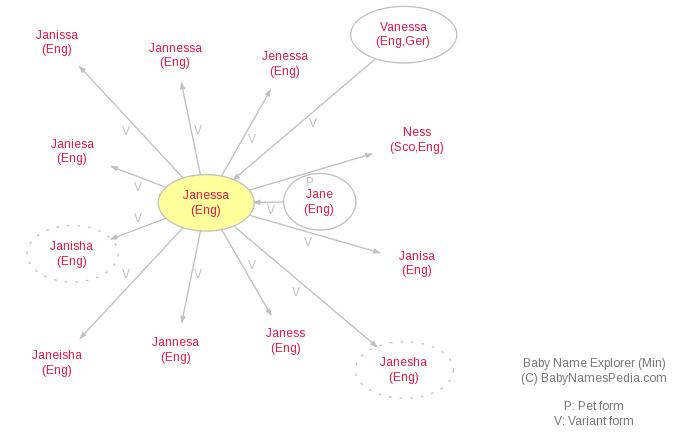