What does Jared mean?

[ 2 syll. ja-red, jar-ed ] The baby boy name Jared is pronounced JHAER-ahD or JHEHR-ahD in English †. Jared's language of origin is Hebrew, and it is predominantly used in English and Hebrew. Jared's meaning is 'descent'. It is a biblical name derived from the element yeredh with the meaning 'to descend, to sink'. An older form of the name is Yared (Hebrew). The name was borne in the Bible by one of the descendants of Adam, who at the age of 162 became the father of Enoch. The name was adopted on a modest scale by Puritans in the 17th century, and it saw a brief revival in the USA and Australia in the 1960s.

In addition, Jared is a derivative of the English, German, and Hebrew Jordan.

Jared has 28 derivatives that are used in English and foreign languages. English derivatives include Gerod, Jahred, Jaired, Jar, Jarad, Jare, Jaredd, Jareid, Jaren, Jarid, Jarr, Jarrad, Jarrard, Jarryd, Jaryd, Jered (used in Dutch and Hebrew too), Jerod, Jerrad, and Jerryd. Other English forms include the spelling variants Jarod, Jarred, Jarrid, Jarrod, Jerad, Jerred, Jerrid, and Jerrod. The Hebrew Yered is a derivative of Jared that is used in foreign languages. 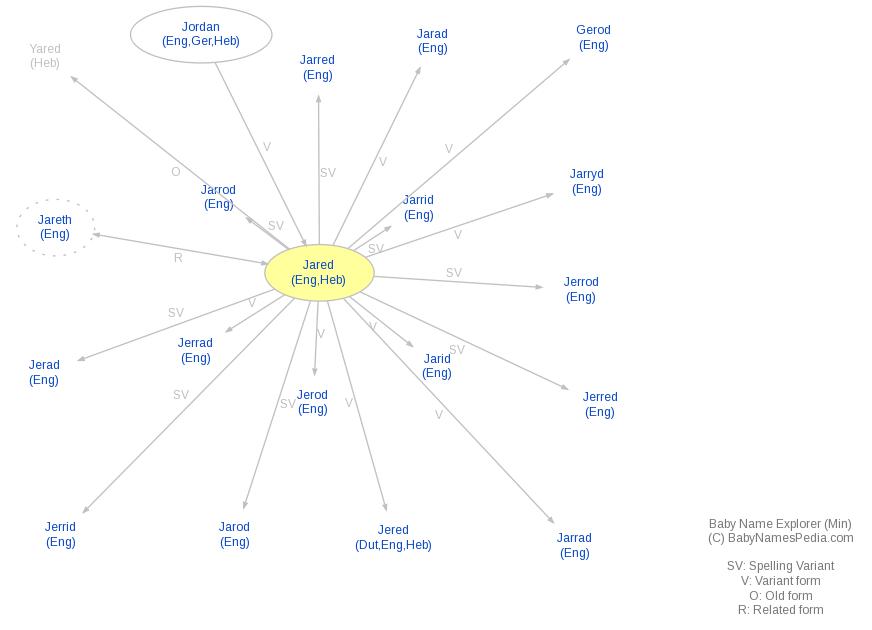