[ 3 syll. ja-sle-ne, jas-l-ene ] The baby girl name Jaslene is pronounced JHaeZLiyiyN †. Jaslene has its origins in the English-American language and it is used largely in English.

Both the origin and meaning of the name Jaslene is inherited by all variant forms.

Jaslene is uncommon as a baby girl name. At the modest height of its usage in 2008, 0.042% of baby girls were named Jaslene. It had a ranking of #376 then. The baby name has seen a substantial decline in frequency since then, and is currently used only on a very light scale. Within all girl names in its family, Jaslene was nevertheless the most widely used in 2018. 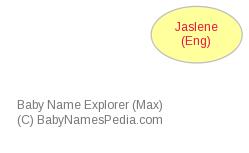