What does Jasmine mean?

[ 2 syll. ja-smi-ne, jas-m-ine ] The baby girl name Jasmine is also used as a boy name, though it is far more popular for girls. It is pronounced JHAEZMihN †. Jasmine is of Old Persian origin. It is used mainly in English and French. An older form of the name is Jasamin (Old Persian). The first name is derived from the name of the fragrant flower which is used to make perfume. The flower name is itself derived via Old French from the Persian element yasmin. The first name was taken up by English speakers in the late 19th century during the period of enthusiasm for flower and plant names. In modern times, the Arabic forms such as Yasmin and Yasmine have also been adopted by English speakers. Jasmine is the feminine form of the French Jasmin.

What are the Variant Forms of Jasmine?

See also the related forms, the name Jasmarie and the Italian Gelsomino.

Jasmine is popular as a baby girl name. The name increased in popularity from the 1970s up to the 1990s; prior to that, it was of only infrequent use. At the height of its usage in 1993, 0.612% of baby girls were named Jasmine. It was #23 in rank then. The baby name has seen a drop in popularity since then. In 2018, it ranked at #136 with a usage of 0.116%, but it was nevertheless the most popular within all girl names in its family. Jasmine was used 4 times more than the 2nd ranked name, Jazmin, in 2018. Jasmine has in the last century been primarily given to baby girls. In 1989, 67 times more baby girls than boys were given the name Jasmine. 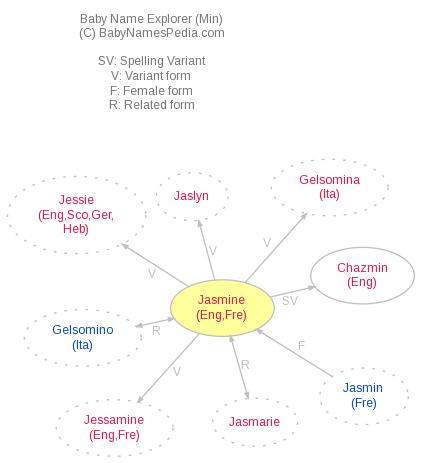