What does Jay mean?

Jay is used predominantly in the English and Indian languages, and its origin is English. The name is of the meaning the letter J; jay bird. The name developed as a diminutive of various names beginning with 'J-' and 'Ja-', riding a current trend of forming names from fashionable sounds. Various names have been invented in this way, such as Jaydey from the initials and the sounds of J.D. Alternatively, the name Jay could also be distantly related to the Latin Gaius. It could also yet represent a transferred use of the surname, which itself originated from the byname given in medieval times to someone who talks a lot, as inspired by the noisy sounds made by the 'jay' bird. In America, the given name was first used in honor of the founding father John Jay (1749-1825), whose surname was derived from the bird name. The given name was fairly popular with English speakers in the 19th century, and it was first bestowed on girls in the early 20th century.

Jay is used predominantly in the Indian language and it is derived from Sanskrit origins. It is derived from the element 'jaya' which means victory. The name was borne by various deities in Hindu mythology. The name Jaya (English and Indian) is the female version of Jay.

In addition, Jay is a pet form (English) of the name Jacob (Dutch, English, German, and Scandinavian).

Jay is also a contraction (English) of the name James (English and Hebrew).

Jay is also a pet form of the name Jason (English).

Jay is a classic favorite. Today it is still a fairly popular baby name for boys, though it was in more widespread use previously. At the modest height of its usage in 1960, 0.248% of baby boys were given the name Jay. It ranked at #78 then. The baby name has since experienced a fall in popularity, and is of occasional use in recent years. In 2018, its usage was only 0.041% and its ranking #399. Within the group of boy names directly linked to Jay, James was the most regularly used. In 2018, it was used 17 times more than Jay. 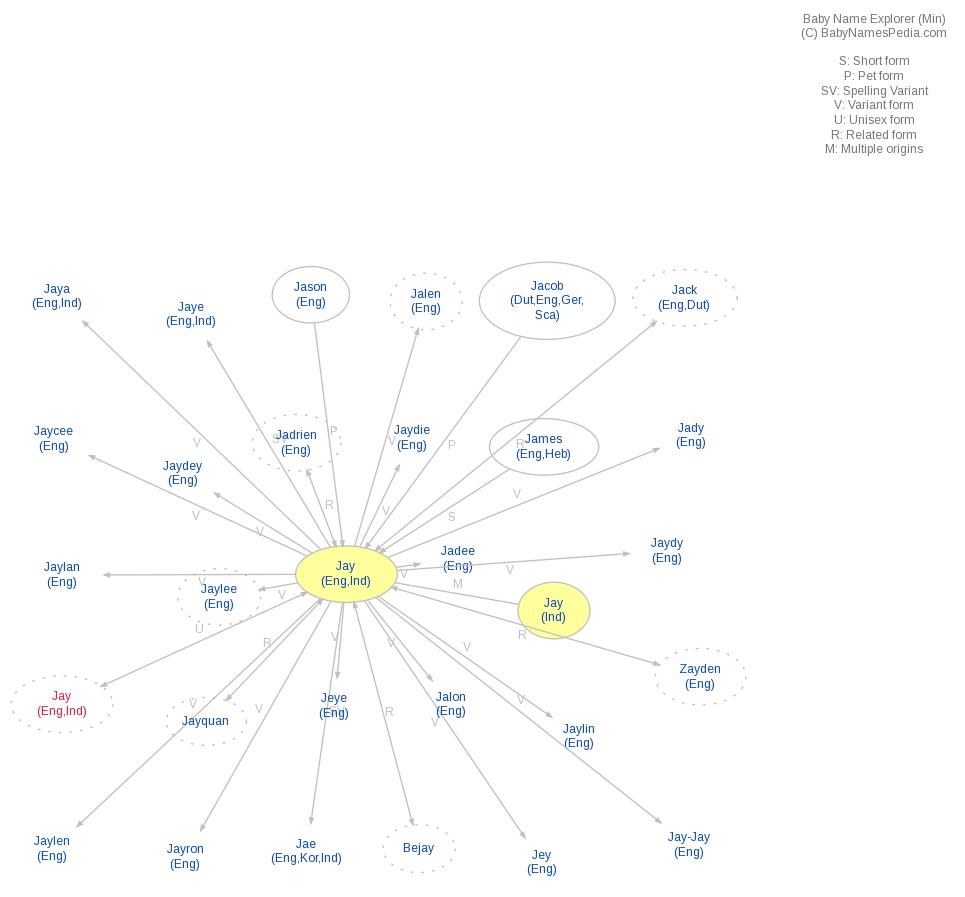