What does Jayden mean?

[ 2 syll. jay-den, ja-yd-en ] The baby girl name Jayden is also used as a boy name, with the latter form being far more popular. It is pronounced JHEY-DehN †. Jayden's origin is Spanish and English-American, and its use, English.

Jayden is an all-time favorite. Today it is still somewhat popular as a baby girl name, but to a lesser degree than it was previously. The name increased in popularity from the 1990s up to the 2000s; prior to that, it was of only very modest use. At the height of its usage in 2007, 0.097% of baby girls were named Jayden. It had a ranking of #172 then. The baby name has seen a drop in frequency since then. In 2018, it ranked at #979 with a usage of 0.015%. Within the family of girl names directly related to Jayden, Jade was the most widely used. It was more regularly used than Jayden by 10 times in 2018. Jayden has mainly been a boy name in the last century. There were 32 times more boys than girls who were named Jayden in 2017. 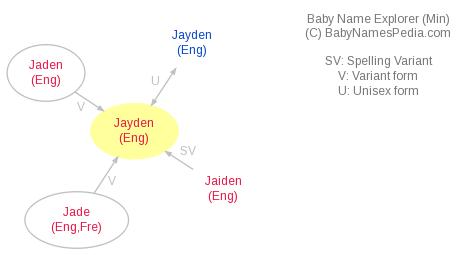