What does Jean mean?

[ 1 syll. jea(n), je-an ] The baby girl name Jean is also used as a boy name, with the latter form being more popular. It is pronounced as JHiy-N or ZH-ae-N †. Jean has its origins in the Hebrew language. It is used largely in English and Scottish. Together with the name Jane, this developed as a variant of Jehanne (Old French) during the Middle Ages. By the end of the medieval period, the name has dropped off in popularity although it remained popular in Scotland. It was taken up by English speakers on a wider basis by the end of the 19th century. In literature, it has been made known by the character Jean Brodie in Muriel Spark's novel The Prime of Miss Jean Brodie (1961). See Jean for more information.

Jean is also a contracted form of the English and French Jeanine in the English language.

Jean is unusual as a baby girl name. Its usage peaked in 1930 with 1.027% of baby girls being named Jean. It was #14 in rank then. The baby name has substantially slipped in popularity since then, and is used only on an infrequent scale today. In 2018, among the family of girl names directly related to Jean, Jane was the most widely used. Although Jean is today more frequently used for boys, there was a period prior to 1989 when more girls were given the name. After 1990, increasingly the name became more popular with boys than with girls. In 1994, 49% more boys than girls were given the name Jean. 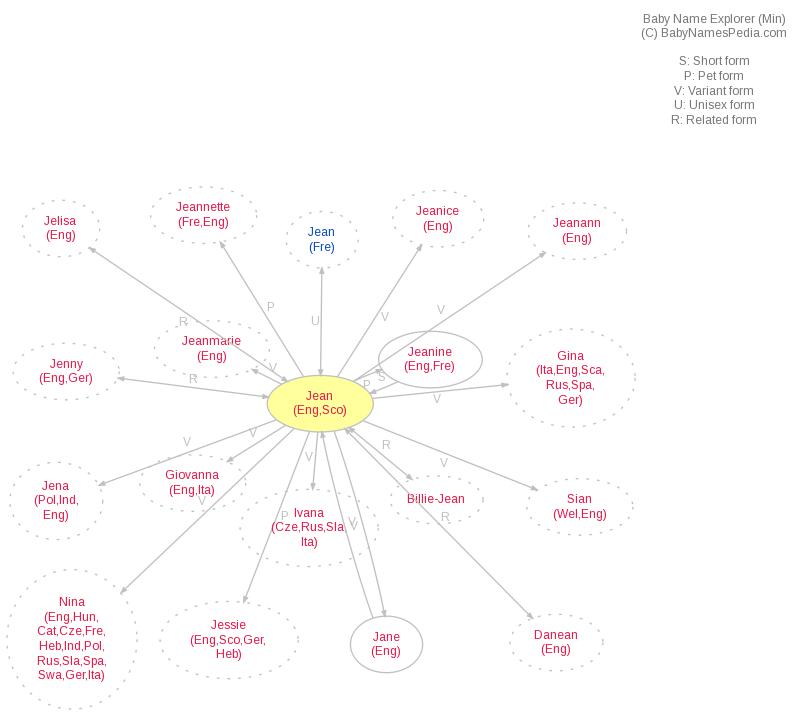