What does Jeanmarie mean?

[ 3 syll. jea-(n)ma-rie, je-anmar-ie ] The baby girl name Jeanmarie is pronounced as JHihNMEHR-iy- †. Jeanmarie's language of origin is Hebrew, Hebrew, Egyptian, French, and Latin, and it is used largely in the English language. From the combination of other given names, but now used as an independent name in its own right.

Jeanmarie is a derivative of the English and Scottish Jean.

Jeanmarie is also a derivative (English) of the Czech, English, French, and German Marie.

The origin and meaning of the name Jeanmarie is inherited by all variant forms.

Jeanmarie is unusual as a baby name for girls. Its usage peaked in 1963 with 0.006% of baby girls being given the name Jeanmarie. Its ranking then was #969. The baby name has since fallen in popularity, and is currently used only on a very modest scale. In 2018, among the group of girl names directly linked to Jeanmarie, Marie was the most widely used. 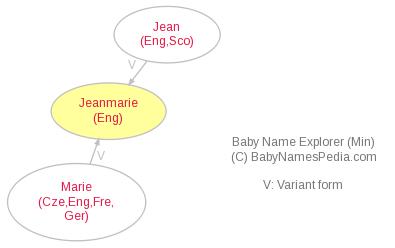