What does Jeannine mean?

[ 2 syll. jea-(n)ni-ne, je-ann-ine ] The baby girl name Jeannine is pronounced in English as JHah-NIYN or in French as ZHae-NIYN †. Jeannine is mainly used in the French and English languages. Its language of origin is Hebrew.

Jeannine is a variant form of the English name Jane in the French language.

Jeannine is also a variant spelling of the English and French name Jeanine.

A form of Jeannine is the English and French variant spelling Jeanine.

Jeannine is unusual as a baby girl name. Its usage peaked modestly in 1929 with 0.102% of baby girls being given the name Jeannine. It had a ranking of #172 then. The baby name has experienced a substantial fall in frequency since then, and is today of irregular use. In 2018, among the family of girl names directly linked to Jeannine, Jane was the most frequently used. 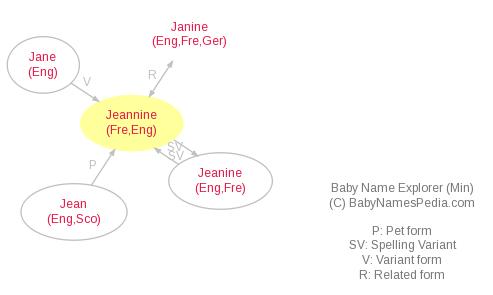