What does Jedidiah mean?

[ 4 syll. je-di-diah, jed-idi-ah ] The baby boy name Jedidiah is sometimes used as a girl name. Its pronunciation is JHehD-ih-DAY-ah (English) †. Jedidiah is used predominantly in the English language and it is derived from Hebrew origins. The name is of the meaning beloved of Yahweh. A biblical name, its meaning is derived from the element 'yahweh' name of God. Jedidyah (Hebrew) is an old form of Jedidiah. The name was borne as an alternate name by King Solomon in the Bible. It was adopted by English Puritans in the 17th century.

Jedidiah has 20 variants that are used in English and other languages. Variants used in English include Jebediah, Jedadia, Jedadiah, Jedadiya, Jedadiyah, Jeddediah, Jededia, Jededish, Jedediya, Jedediyah, Jediah, Jedidia, Jedidiya, Jedidiyah, and Yedidya. The short form Jed, the pet forms Didi and Jedd, and the variant spelling Jedediah are other English forms. A variant of Jedidiah in other languages is Yedidiah (Hebrew).

Jedidiah is a somewhat popular baby name for boys. The name's popularity has been rising since the 2000s. At the modest peak of its usage in 2017, 0.018% of baby boys were given the name Jedidiah. Its ranking then was #689. In 2018, its usage was 0.018% and its ranking #704, and it was the most commonly used out of all boy names in its group. In the past century Jedidiah has predominantly been a baby boy name. 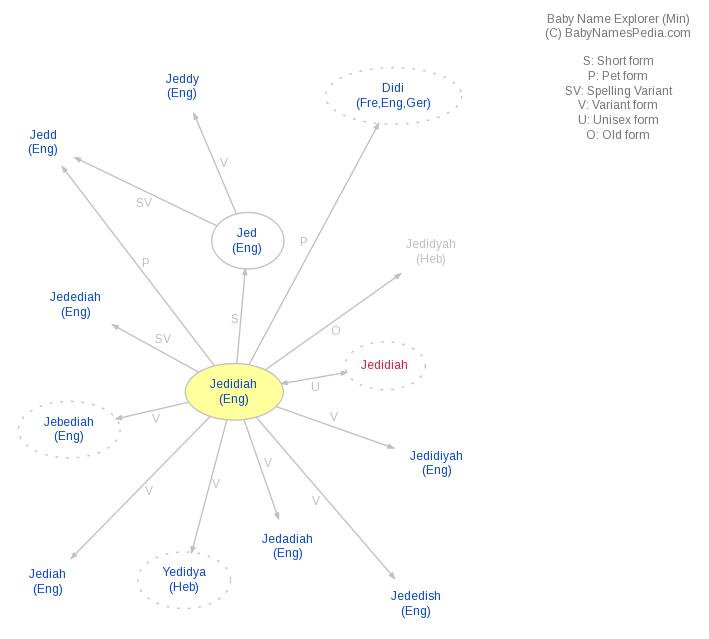