What does Jefferson mean?

[ 3 syll. jef-fer-son, je-ffers-on ] The baby boy name Jefferson is pronounced as JHEHFF-erSahN †. Jefferson is used chiefly in the English language, and its origin is Germanic and English. English origin: Its meaning is derived from the element 'son'. The first name is from the surname meaning 'son of Jeffrey'. It was first adopted as a given name in the USA in the 19th century, where it was often bestowed in honor of the President Thomas Jefferson (1743-1826), the principal author of the Declaration of Independence, and the Confederate President Jefferson Davis (1808-1889).

In addition, Jefferson is a variant of the name Geoffrey (English and German) in the English language.

Jeff (English contraction) is another variant of Jefferson.

Jefferson is a classic favorite. At present it is still fairly popular as a baby name for boys, though it was in more widespread use in the past. Its usage peaked modestly in 1901 with 0.023% of baby boys being given the name Jefferson. It ranked at #354 then. The baby name has since experienced a fall in popularity, and is of occasional use in recent years. In 2018, its usage was 0.019% and its ranking #680. Among the group of boy names directly linked to Jefferson, Jeffrey was the most regularly used. In 2018, the name was thrice as popular as Jefferson. 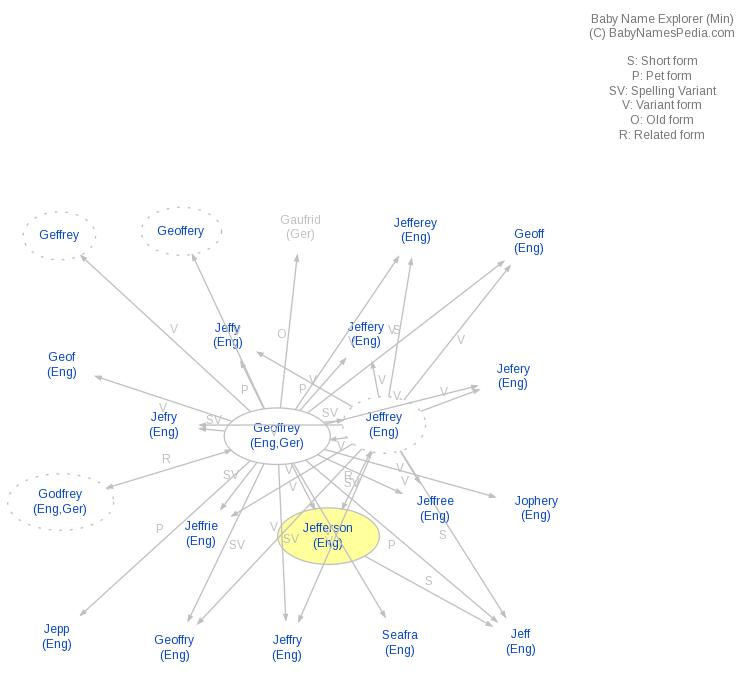