What does Jena mean?

[ 2 syll. je-na, jen-a ] The baby girl name Jena is pronounced as JHEH-N-aa- †. Jena's language of origin is Sanskrit, and it is predominantly used in the Polish, Indian, and English languages. The name is of the meaning 'patience'.

Jena is a derivative of the Italian, English, Scandinavian, Russian, Spanish, and German Gina.

Jena is also a derivative (Polish) of the English and Scottish Jean.

Jena is also a derivative (English) of the English and German Jenna.

Jena is also a pet form (English) of the English and German Jennifer.

Derivatives of Jena include the names Jenah, Jenal, Jennah, and Jenya.

Jena is an unusual baby name for girls. Its usage peaked modestly in 1986 with 0.034% of baby girls being given the name Jena. Its ranking then was #375. The baby name has since fallen from favor, and is currently used only on a very light scale. In 2018, among the group of girl names directly linked to Jena, Jennifer was the most widely used. 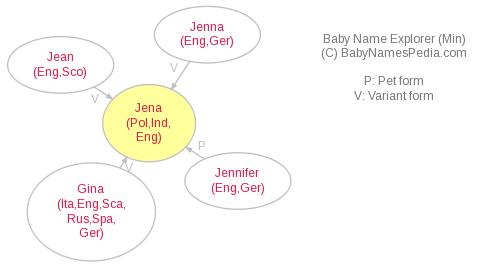