What does Jeremiah mean?

[ 4 syll. je-re-miah, jer-emi-ah ] The baby boy name Jeremiah is sometimes used as a girl name. Its pronunciation is JHehR-ah-MAY-ah in English †. Jeremiah is used chiefly in the English and Hungarian languages, and its origin is Hebrew. The name is of the meaning exalted by Yahweh, appointed by Yahweh. A biblical name, it is derived from the elements 'ruwm' meaning to uplift, to lift up ; 'yahweh' name of God. Yirmeyah (Hebrew) is an older form of Jeremiah. The name was borne by a major 7th century BC prophet in the Bible who wrote the Book of Jeremiah and, according to tradition, the Book of Lamentations. The name was adopted by 17th century Puritans and Christian fundamentalists along with other biblical names. The name has sometimes been bestowed in honor of the prophet in Ireland, where he was believed to have paid a visit. The name has been taken as an Anglicized form of Diarmad and Diarmaid in Scotland and Ireland.

Jeremiah is a variant of the name Jeremy (English) in the Hungarian language.

Jeremiah is popular as a baby name for boys. The name's popularity has been increasing since the 1960s. At the modest height of its usage in 2010, 0.376% of baby boys were given the name Jeremiah. Its ranking then was #52. In 2018, its usage was 0.288% and its ranking #65, and it was the most popular within all boy names in its group. In 2018, Jeremiah was thrice as popular as the next most popular name, Jeremy. Jeremiah has predominantly been a baby boy name in the past century. 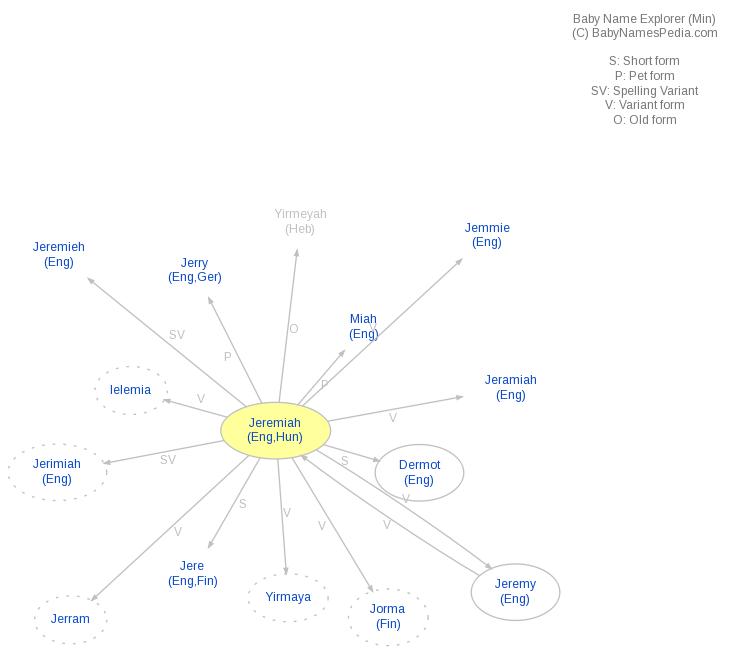