What does Jeremy mean?

[ 3 syll. je-re-my, jer-emy ] The baby boy name Jeremy is pronounced JHEHR-ah-Miy or JHEHR-Miy in English †. Jeremy is of Hebrew origin and it is used largely in the English language.

The name Jeremy is used to a great extent; it has 49 variant forms that are used in English and foreign languages. Variant forms of Jeremy used in English include Geremy, Jaremay, Jaremi, Jaremy, Jemmie, Jer, Jerami, Jeramie, Jereamy, Jeremee, Jeremey, Jeremi, Jeremie (used in French too), Jeremry, Jeremye, Jereomy, Jeriemy, Jerime, Jerimy, Jermey, Jeromee, Jeromey, Jeromi, Jeromie, Jerr, Jerremy, Jerrie, and Jérémy. Other English forms include the contraction Jere (used in Finnish too), the familiar forms Jem, Jemmy, and Jerry, and the variant spellings Jeramee, Jeramey (used in Hebrew too), Jeramy, and Jeromy.

Variant forms share both the origin and meaning of the name Jeremy.

Jeremy is popular as a baby boy name. The name jumped in popularity from the 1940s up to the 1970s. At the height of its usage in 1977, 1.265% of baby boys were given the name Jeremy. It was #15 in rank then. The baby name has seen a substantial decline in frequency since then. In 2018, it ranked at #204 with a usage of only 0.101%, but it was nonetheless the 2nd most popular after Jeremiah, within all boy names in its family. The name was thrice as popular as Jeremy in 2018. The name Jeremy has primarily been a boy name, although it has also been given to girls in the last century. In 1977, 149 times more boys than girls were given the name Jeremy. 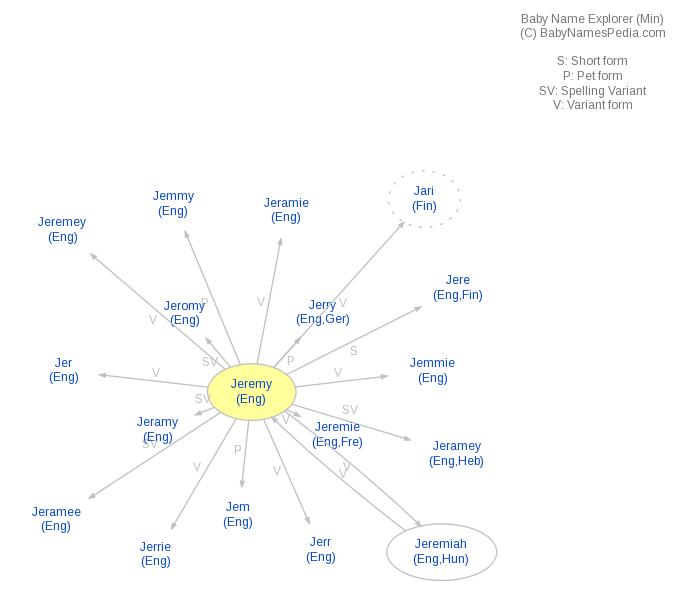