What does Jerome mean?

[ 2 syll. je-ro-me, jer-ome ] The baby boy name Jerome is pronounced as JHeh-RAHM- or ZH-EYEYRahM- †. Jerome is mainly used in the English and French languages. It is of Old Greek origin. The meaning of the name is sacred name, one who bears a holy name. A biblical name, it is derived from the words 'hieros' meaning sacred, holy ; 'onoma' name. Older forms of Jerome include Hieronymos (Old Greek) and Hieronymus (Latin). The name was borne by Saint Jerome (342-420), who translated the Bible into its Latin version, the Vulgate; his Greek name was Eusebios Hieronymos Sophronios. The first name was used occasionally by English speakers from the 12th century, often in the form Geronimus. The French Jerome eventually dominated all other forms of the name, and it saw a revival in popularity among 19th century English speakers. Hieronymus is the Latinate form of Jerome; it is still used in Bavaria and Rhineland in Germany.

The name Jerome is widely used; it has 31 variant forms that are used in English and other languages. Variant forms of Jerome used in English include Gerrie, Gerry, Hierome, Jairome, Jarom, Jere, Jerolin, Jerolyn, Jerom, Jeromo, Jeromy, Jeron, Jerone, Jerónimo (also used in Spanish), Jerrie, Jerromy, Jerron, Jerrone, and Jérome. The familiar form Jerry, and the variant spellings Gerome and Jerrome are other English forms.

Jerome is a classic favorite. At present it is still a somewhat popular baby boy name, but not to the degree it was previously. At the height of its usage in 1938, 0.194% of baby boys were given the name Jerome. It was #93 in rank then. The baby name has seen a steep decline in frequency since then, and it is of modest use in recent years. In 2018, its usage was only 0.013% and its ranking #870. Within the family of boy names directly linked to Jerome, Jerry was the most widely used. In 2018, it was 80% more frequently used than Jerome. 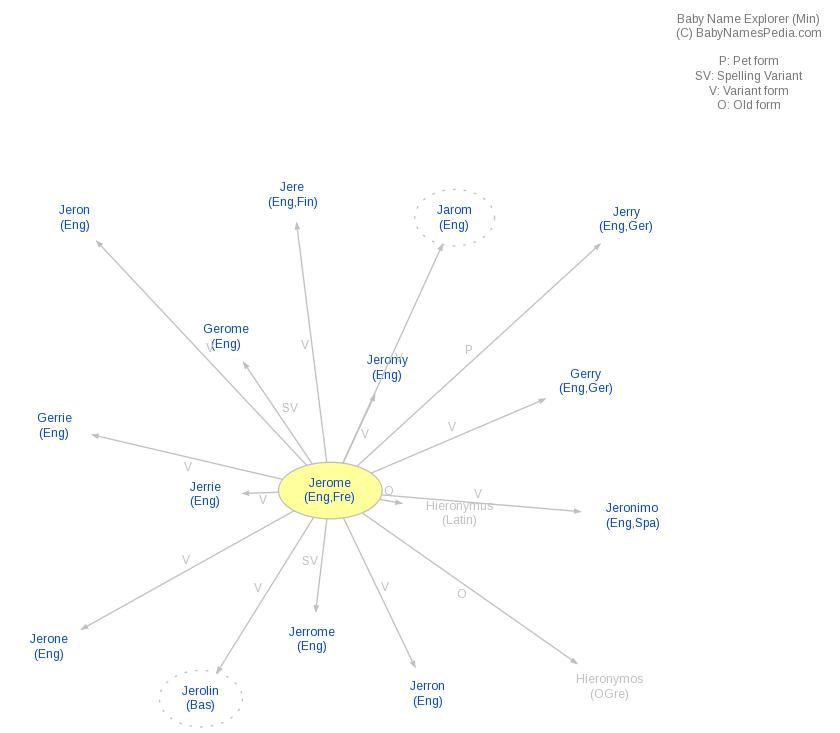