What does Jesse mean?

[ 2 syll. jes-se, je-sse ] The baby boy name Jesse is sometimes used as a girl name. Its pronunciation is JHEHS-iy (English) †. Jesse is used predominantly in the English and German languages, and it is derived from Hebrew origins. Biblical name: The name's meaning is God's gift. Yishay (Hebrew) is an old form of Jesse. The name was borne in the Bible by the father of King David, of whom Jesus was a descendant. The name was commonly adopted by English Puritans in the 18th century. It is currently more popular in the USA than elsewhere. The name was also known from the notorious US outlaw of the Wild West, Jesse James (1847-1882). The name Jessalyn (English) is the female version of Jesse.

The name Jesse is widely used; it has 24 variants that are used in English and other languages. Variants used in English include Isai, Jese, Jesee, Jesi, Jesiah, Jesmar, Jesmarr, Jessa, Jessamine, Jessamyne, Jessee, Jessey, Jessé, Jessi, Jessica, Jessmar, Jessmarr, and Jezze. The short form Jess, the diminutive form Jessie, and the variant spelling Jessy (used in German as well) are other English forms. Ieke (Hawaiian), Ieki (Hawaiian), and Yishai (Hebrew) are foreign variants of Jesse.

Jesse is a classic favorite. Today it is still a popular baby name for boys, though to a lesser extent than it was before. At the peak of its usage in 1981, 0.561% of baby boys were given the name Jesse. It ranked at #37 then. The baby name has since fallen in popularity, and is of occasional use in recent years. In 2018, its usage was only 0.110% and its ranking #185, but it was nonetheless the most popular out of all boy names in its group. In 2018, 10 times more boys were named Jesse than the subsequent ranked name, Jesiah. In the past century Jesse has mostly been a baby boy name. In 2000, the name Jesse was given to 15 times as many baby boys than girls. 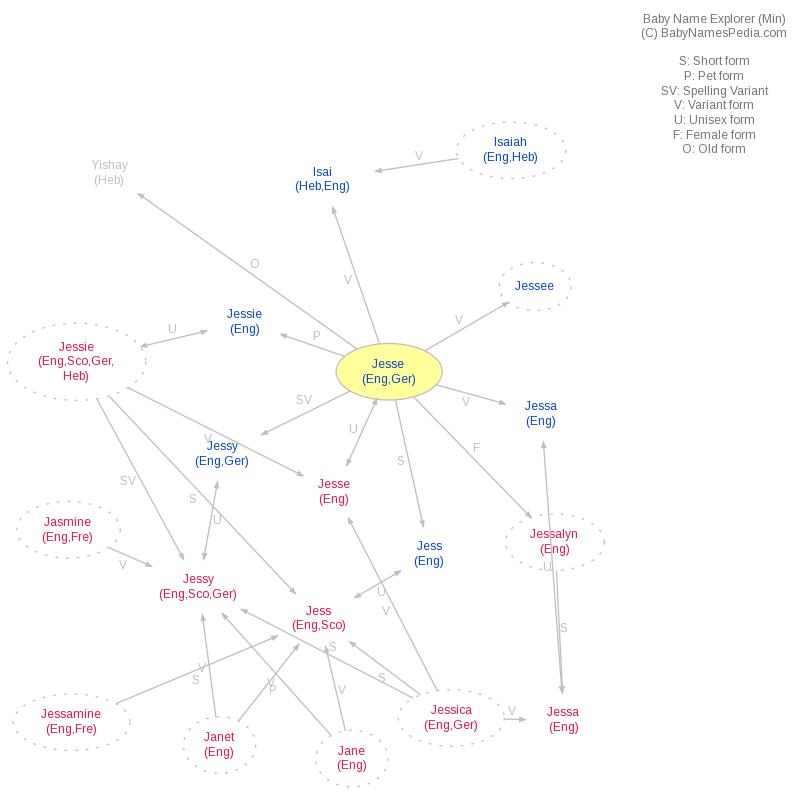