What does Jessica mean?

[ 2 syll. jes-si-ca, je-ss-ica ] The baby girl name Jessica is also used as a boy name, though it is far more popular for girls. It is pronounced JH-S-ih-Kaa- †. Jessica has its origins in the Hebrew language. It is used largely in English and German. The meaning of Jessica is 'God beholds, foresight'. The name was first used by Shakespeare in naming the daughter of Shylock in his play The Merchant of Venice (1596). It appears that Shakespeare derived the name from Iscah (Hebrew) or the alternative form Jesca (Hebrew), which appeared in the book of Genesis of the Bible as the name of a daughter of Haran. These two biblical names are in turn derived from Yiskah (Hebrew), which is of the root word sakhah. The name has long been associated with Jews, and it appears that this was Shakespeare's intention as well. The name was used occasionally by English speakers from the 16th century, and it saw a revival in the late 19th century.

What are the Variant Forms of Jessica?

Jessica is rather popular as a baby girl name. The name increased in popularity from the 1930s up to the 1980s. At the peak of its usage in 1987, 2.990% of baby girls were named Jessica. It was #1 in rank then. The baby name has suffered a substantial decline in popularity since then. In 2018, it ranked at #312 with a usage of only 0.057%, but it was nevertheless the most popular out of all girl names in its family. Jessica was twice as popular as the next ranked name, Jessie, in 2018. Jessica has primarily been a baby girl name in the last century. In 1991, 375 times more baby girls than boys were given the name Jessica. 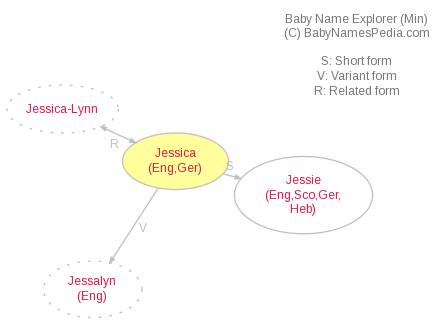