What does Jessie mean?

[ 1 syll. jes-sie, je-ss-ie ] The baby girl name Jessie is also used as a boy name, though it is more commonly a girl name. It is pronounced JH-S-iy- †. Jessie is of Hebrew and Old Persian origin. It is used mainly in English, Scottish, German, and Hebrew. The name was first taken up by English speakers in the 19th century as a diminutive of Jean, especially in Scotland.

In addition, Jessie is a form (English and Scottish) of the English Jane.

Jessie is also a familiar form (English and Scottish) of the English Janet.

Jessie is also a form (English) of the English and French Jasmine.

Jessie is also a familiar form (Scottish) of the English and Scottish Jean.

Jessie is also a contracted form (English, German, and Hebrew) of the English and German Jessica.

Jessie has 20 forms that are used in English and foreign languages. English forms of the name include Jesee, Jesie, Jessalyn, Jesse, Jessea, Jessey, Jessé, Jessia, Jessiah, Jessiya, and Jesy. Other English forms include the contracted form Jess (used in Scottish too), and the spelling variants Jescie, Jesey, Jesi, Jessee, Jessi, Jessy (used in Scottish, and German too), and Jessye. The Scottish Teasag is a form of Jessie that is used in foreign languages.

Jessie is an all-time favorite. Today it is still rather popular as a baby girl name, but to a lesser degree than it was previously. In 1900, 0.448% of baby girls were named Jessie. It was #53 in rank then. The baby name has seen a marked decline in frequency since then, and it is of only modest use in recent times. In 2018, it ranked at #656 with a usage of 0.024%. Within the family of girl names directly related to Jessie, Jasmine was the most widely used. It was 5 times more frequently used than Jessie in 2018. Though there were times from 1948 to 2009 when more boys than baby girls were given the name Jessie, the name is today more frequently used for baby girls. In 2017, 2 times more baby girls than boys were given the name Jessie. 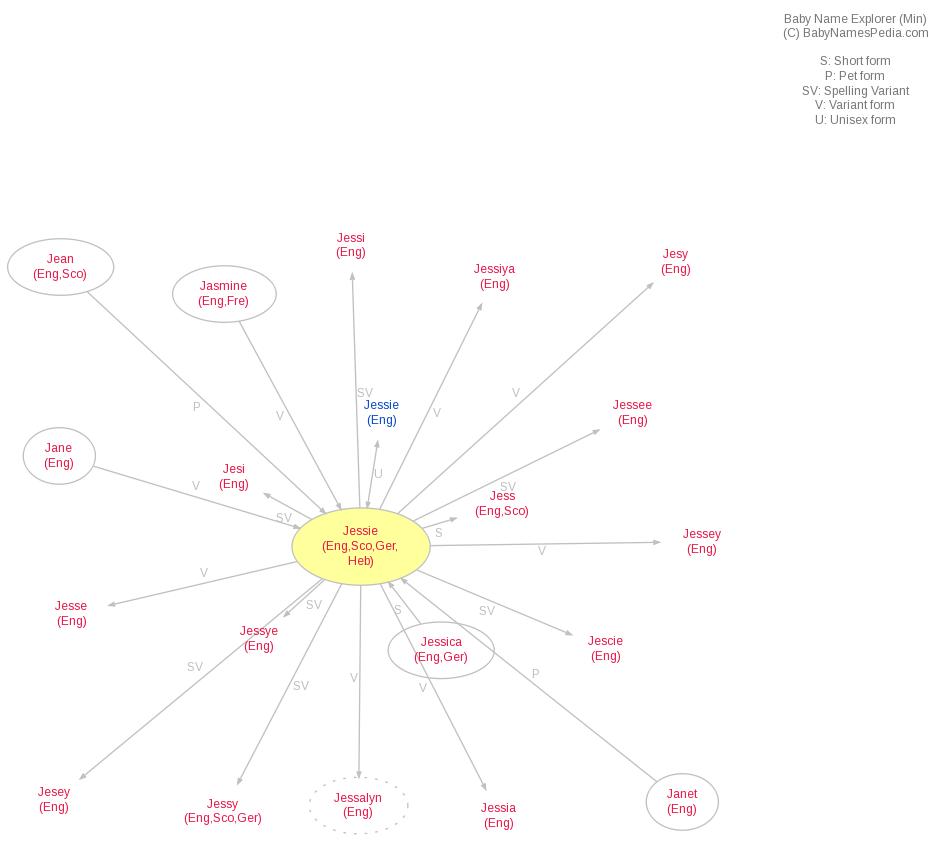