What does Jethro mean?

[ 2 syll. jet-hro, je-th-ro ] The baby boy name Jethro is pronounced in English as JHEH-TH-Row †. Jethro is used chiefly in the English language and its origin is Hebrew. A biblical name, it is derived from the element 'yether' which means excellence, abundance. Ithra (Hebrew) and Yitro (Hebrew) are original forms of Jethro. The name was borne in the Old Testament of the Bible by the Midianite priest and father of Zipporah, the wife of Moses. During his exile, Moses tended to Jethro's flocks, and after Moses' success, Jethro advised Moses to delegate his duties, an advice which Moses took.

The name was therefore widely adopted by English Puritans in the 16th century, but its use diminished over the later centuries due to suburban associations from the well-known English agricultural pioneer Jethro Tull (1674-1741). The latter's name was adopted by the Grammy Award-winning 1970s English progressive rock band Jethro Tull, whose popularity helped promote the adoption of the first name. In the 1980s, the name was made known by the fictional Jethro Larkin of the long-running British radio soap opera The Archers (1950-). In America, the name was made known by the dim-witted character Jethro Bodine in the situation comedy The Beverly Hillbillies (1962-1971). The name Jethra is the female form of Jethro.

Jett (contraction) is another variant of Jethro.

Jethro is an unusual baby name for boys. Its usage peaked modestly in 1913 with 0.005% of baby boys being given the name Jethro. It ranked at #922 then. The baby name has since experienced a fall in popularity, and is today of sporadic use. In 2018, among the group of boy names directly linked to Jethro, Jett was the most widely used. 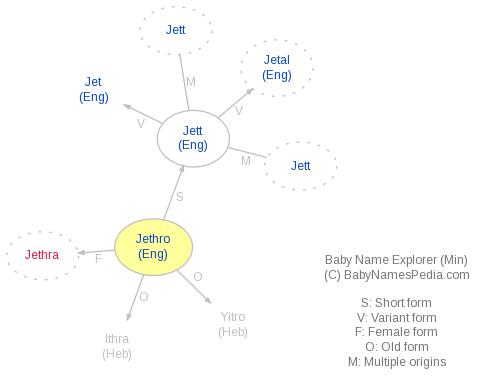