What does Jim mean?

[ 1 syll. ji(m), jim- ] The baby boy name Jim is pronounced as JHihM †. Jim is used chiefly in English and Dutch. It is derived from Hebrew origins. Jim was a medieval diminutive of James. It was adopted generally by English speakers from the mid-19th century, possibly made known by the character Jim Hawkins in Treasure Island (1883), the adventure novel by Robert Louis Stevenson.

In addition, Jim is a variant of the name Jacob (Dutch, English, German, and Scandinavian) in the English language.

Jim is also a diminutive of the name James (English and Hebrew) in the Dutch and English languages.

Variant forms share the origin and meaning of Jim.

The diminutives Jimbo (English), Jimmie (English), and Jimmy (English) are other variants of the name.

Jim is unusual as a baby boy name. Its usage peaked in 1944 with 0.270% of baby boys being named Jim. It had a ranking of #68 then. The baby name has experienced a marked fall in popularity since then, and is today of very modest use. Among the family of boy names directly related to Jim, James was the most commonly used in 2018. 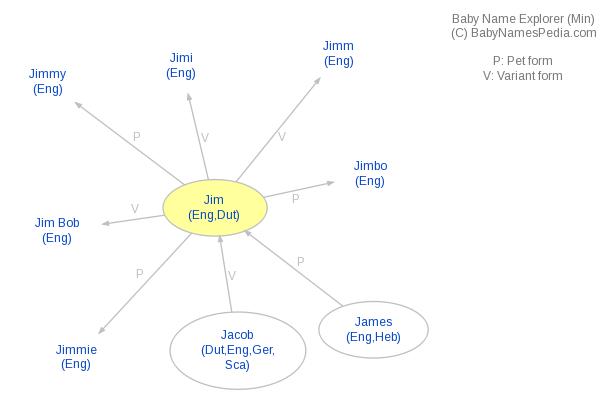