What does Joachim mean?

[ 3 syll. joa-(c)him, jo-ach-im ] The baby boy name Joachim is pronounced in English as JHOW-ah-KihM, in French as ZHow-ae-SHEHN, in German as Yow-AA-K-ihM or YOW-aa-K-ihM, or in Polish as Yao-AA-K-iyM †. Joachim is used chiefly in the English, French, German, and Polish languages, and it is derived from Hebrew origins. The name is of the meaning Yahweh will establish, established by Yahweh. A biblical name, it is derived from the elements 'yahweh' name of God ; 'Quwm' meaning to rise, to establish. Jehoiakim (Hebrew), Johoiachin (Hebrew), and Yehoyaqim (Hebrew) are original forms of Joachim. The name could be from 'Yehoyaqim' or Johoiachin (Hebrew), which was borne in the Bible by a king of Judah who went into exile in Babylonia after his defeat, or else from Jehoiakim (Hebrew), the name of his father. The father of the Virgin Mary is also supposed to bear the name Joachim; according to some Catholic and Orthodox theologians, he was known as Eli, short for Eliakim, as found as the genealogy recorded in the Book of Luke in the Bible, which supposedly referred to Mary's lineage. The use of the name as such was also stated in the apocryphal Gospel of James. There is no conclusive record of the father of Mary in the Bible, but through medieval tradition, he was venerated as Saint Joachim. The first name was thereafter widely adopted by English speakers in the 13th century. The name Joaquina (Spanish) is the female form of Joachim.

The name Joachim is used to a great extent; it has 31 variants that are used in English and other languages. Variants used in English include Achim (used in German as well), Jachim, Jakim, Jaquin, Joacheim, Joakeen, Josquin, Jov, Yakim, and Yehoyakem. The short form Akeem is another English variant.

Joachim is infrequently used as a baby name for boys. It is not listed in the top 1000 names. In 2018, among the group of boy names directly linked to Joachim, Joaquin was the most widely used. 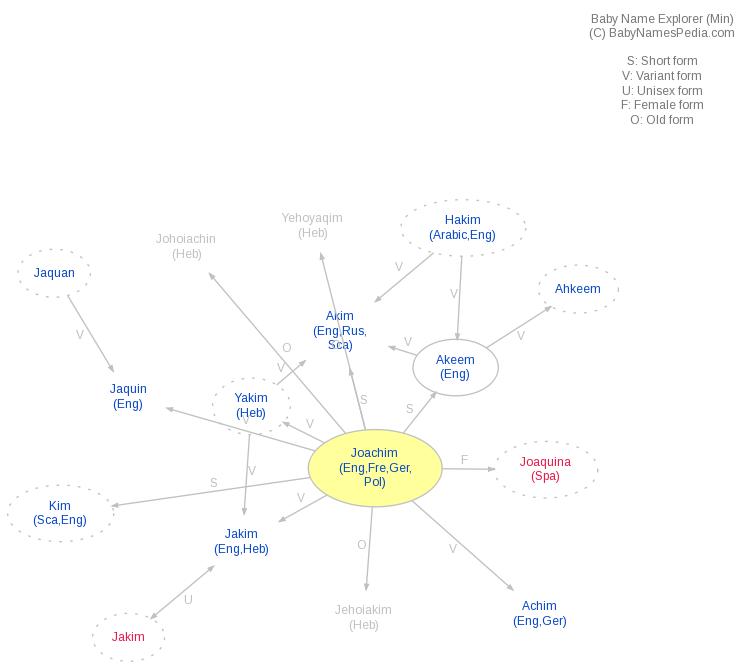