What does Joan mean?

[ 2 syll. joa(n), jo-an ] The baby girl name Joan is also used as a boy name, with the latter form being slightly more popular. It is pronounced HHowAEN or JHowN- †. Joan has its origins in the Hebrew language and it is used largely in English. An older form of the name is Johanna (Latin). The name was first used by English speakers in the medieval period, introduced from France in the contracted forms Jhone or Johan. Jhone, the daughter of Henry II, brought the name to England in the 12th century, and the modern spelling first appeared in the 14th century. The name Joan was used then as the usual feminine form of John, before being replaced by other forms such as Jane from the 16th century onwards. Joan of Arc (Jeanne d'Arc in French, 1412-1431) was a 15th-century heroine who led the French army against English forces and was eventually burned at the stake by her enemies. Her canonization in 1920, as well as the popularity of the George Bernard Shaw's play Saint Joan (1923) which was based on her life, raised the popularity of the name in the 20th century.

Joan is a form of the English Jane.

The name Joan is used to a great extent; it has 44 forms that are used in English and foreign languages. English forms of Joan include Jane, Jo-Ann, Jo-Anne, Joana, Joandra, Joane, Joaneil, Joani, Joanka, Joanmarie, Joann, Joanna (used in Polish as well), Joannanette, Joanne, Joannue, Joayn, Joeann, Joeanna, Joeanne, Joen, Joenn, Johanna, Johannah, Jona, Jonee, Jonette, and Sion. Other English forms include the contracted form Jo (used in German as well), the diminutives Joanie (used in Hebrew as well), Joannie, Joni, Jonie, and Jonni, and the spelling variant Jone (used in Basque and as well).

Joan is uncommon as a baby girl name. At the height of its usage in 1932, 1.902% of baby girls were named Joan. It had a ranking of #5 then. The baby name has substantially slipped in popularity since then, and is of only sporadic use today. In 2018, within the family of girl names directly related to Joan, Joanna was the most frequently used. Although Joan is today somewhat more frequently used for boys, there was a period prior to 1993 when more girls were given the name. After 2000, increasingly the name became more popular with boys than with girls. 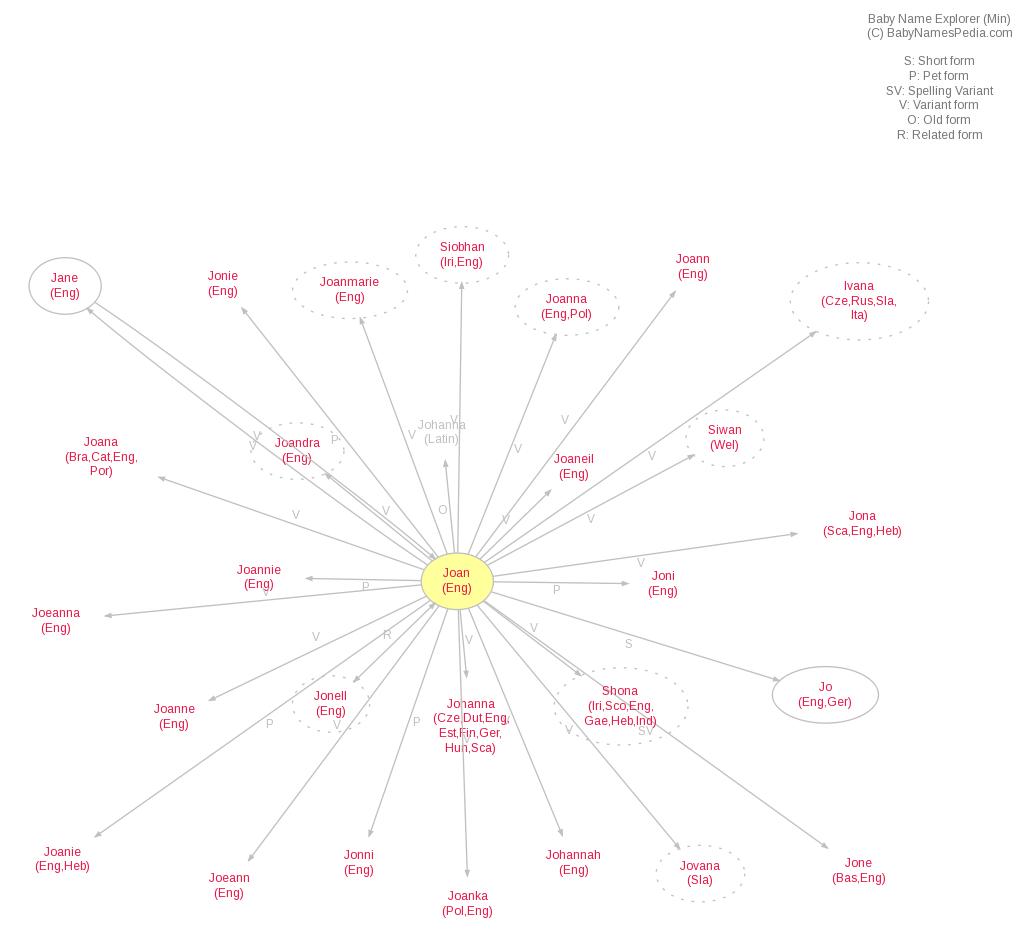