What does Joana mean?

[ 3 syll. joa-na, jo-ana ] The baby girl name Joana is pronounced Z-owAA-Naa- †. Joana's language of origin is Hebrew. It is predominantly used in the Brazilian, Catalan, English, and Portuguese languages.

Joana is a derivative (Brazilian, Catalan, English, and Portuguese) of the English Jane.

Joana is also a derivative of the English Joan.

Joana is also a variant spelling (English) of the English and Polish Joanna.

Joana is a rare baby girl name. At the modest peak of its usage in 2001, 0.018% of baby girls were given the name Joana. It was #698 in rank then. The baby name has steeply declined in popularity since then, and is currently used only on a very light scale. In 2018, out of the family of girl names directly linked to Joana, Joanna was the most commonly used. 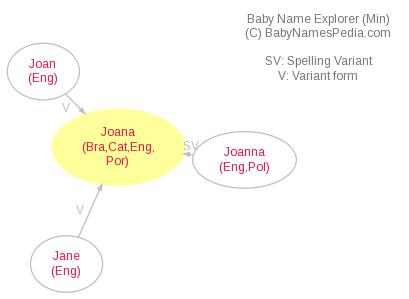