What does Jocelyn mean?

[ 3 syll. jo-ce-lyn, joc-el-yn ] The baby girl name Jocelyn is also used as a boy name, though it is far more popular for girls. It is pronounced as JHOWZ-eh-LihN †.

Jocelyn has its origins in the Old French language. It is used largely in English and German. It is derived from the word gaut which is of the meaning 'little Goths'. The name is of uncertain derivation. It is most likely from Joscelin (Old French), Goscelin (Old French), or Gautzelin (Old French), which were introduced by the Normans from France to England. The old form was originally from the name of the Germanic tribe of the Gauts or Gautelen, which can be taken to mean 'little Goths'. The name was modified with the double diminutives of '-el' and '-in' as was common in Old French. Joscelyn was widely used as a first name among medieval English speakers, but its use tapered off by the late Middle Ages, before again enjoying a revival in the 19th century, promoted by the use of the name for the John Galsworthy novel Jocelyn (1898). See Jocelyn for more information.

Jocelyn's language of origin is Breton. It is derived from the word iodoc with the meaning 'lord'. An older form of the name is Iodoc (Breton).

Jocelyn's origin is English. The name can be taken as a modern combination of Joyce and Lynn.

Jocelyn is popular as a baby girl name. The name increased in popularity from the 1940s up to the 2000s. Its usage peaked modestly in 2007 with 0.251% of baby girls being named Jocelyn. It had a ranking of #50 then. The baby name has experienced a decline in popularity since then. In 2018, it ranked at #194 with a usage of 0.084%, but it was nevertheless the most popular among all girl names in its family. Jocelyn was 6 times more regularly used than the next ranked name, Joselyn, in 2018. 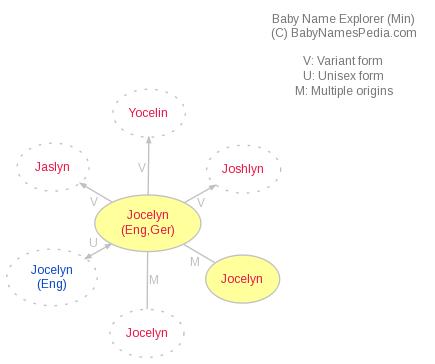